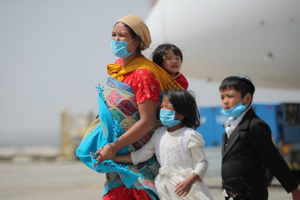 Despite many challenges, a group of 160 Bnei Menashe landed in Israel on Monday as part of an emergency airlift arranged by the Jewish Agency and Shavei Israel, with the International Christian Embassy Jerusalem serving as a main sponsor of this urgent Aliyah operation. Several hundred more members of the ancient Israelite tribe have been approved to immigrate to Israel, but for now they remain stuck in India, which is facing a sharp spike in the coronavirus.

Due to the surge in coronavirus cases in India, the Israeli government recently decided to launch an emergency airlift of 548 members of the Bnei Menashe tribe in northeast India to Israel by the end of May. Descendants of the lost Israelite tribe of Manasseh, they have already been approved to immigrate to Israel, and the ICEJ has committed so far to sponsoring Aliyah flights for 99 of these olim (newcomers).

Among the Israelite descendants who have returned to the Promised Land in modern times, the Bnei Menashe identify as part of the “lost tribe” of Manasseh from the northern kingdom of Israel exiled some 2700 years ago. Our support for the return of the Bnei Menashe is based on God’s promises to Israel to “bring your descendants from the east”, as we read in Isaiah 43:5.

The Bnei Menashe (“Sons of Manasseh”) are a people living in northeast India who claim that their ancestors were forcibly exiled from the Land of Israel in 732 BC by the Assyrians into the region of today’s Iraq and Iran. From there, they journeyed eastward along the Silk Road to China, where for centuries they are believed to have been part of the community of Kaifeng Jews. They later wandered southward during a time of persecution and eventually settled in the states of Mizoram and Manipur, located in an isolated enclave of India laying between Myanmar and Bangladesh.

From there, the Bnei Menashe continued to cling to their biblical traditions and identity. They kept the Sabbath and observed kosher laws, celebrated the Jewish festivals, and practiced sacrificial rites. Rediscovered in modern times, their Israelite ancestry was officially recognized by Israel’s rabbinic authorities in 2005.

Israel has allowed over 2,400 members of the Bnei Menashe community to make Aliyah so far. Starting in 2012, almost half of them (1119 in total) have come on Aliyah flights sponsored by the ICEJ.

Throughout their years here, the Bnei Menashe have become valued members of Israeli society, with many contributing to the nation as soldiers, medical professionals or other fields of endeavor. They greatly respect traditional family values, have a strong work ethic, and are deeply loyal to the Jewish state.

During Israel’s recent Independence Day celebrations in April, the Bnei Menashe had special reason to rejoice as a member of their community was honored as one of Israel’s outstanding soldiers at an official ceremony in Jerusalem presided over by outgoing President Reuven Rivlin.

For the Bnei Menashe community, Nadiv Khaute was not the first recipient of the President’s Medal of Excellence. In 2005, IDF Staff Sergeant Tamir Baite, who serves in the Shaked unit of the Givati Brigade, was honored. And in 2017, IDF Staff Sergeant Eliazer Menashe of the Golani Brigade was given the medal. Their success stories highlight the contributions that the Bnei Menashe are making to the State of Israel. The ICEJ is pleased to have a role in the return of this unique community to Israel.

The Bnei Menashe already in Israel have been serving the nation with honor and distinction, but many more are still waiting to make Aliyah.

Reuven and Yokhevet Thongkhai Haokip, from Nagaland, India, are anxiously awaiting their Aliyah date and the reunification of their family. When people ask them why they want to leave the good life they have in India, they respond: “If our father Abraham was willing to leave his land and his father’s house for the Promised Land, why shouldn’t we?”

Reuven, a retired police officer, and Yokhevet, a homemaker, have four daughters and two sons. Their eldest daughter, Maayan, made Aliyah in 2007 and lives in Israel with her husband and three daughters.

In 2015, their daughters Ayelah and Sarah also made Aliyah and raised their families in Israel. Since then, the family has been separated and now is the time to reunite them. We invite you to take a place alongside the ICEJ in helping bring the rest of their family and many other Bnei Menashe to Israel soon.

Please consider a generous donation in this important hour of need to help these Jewish people who are in distress to safely reach the land of Israel.