The Blessing of Abraham 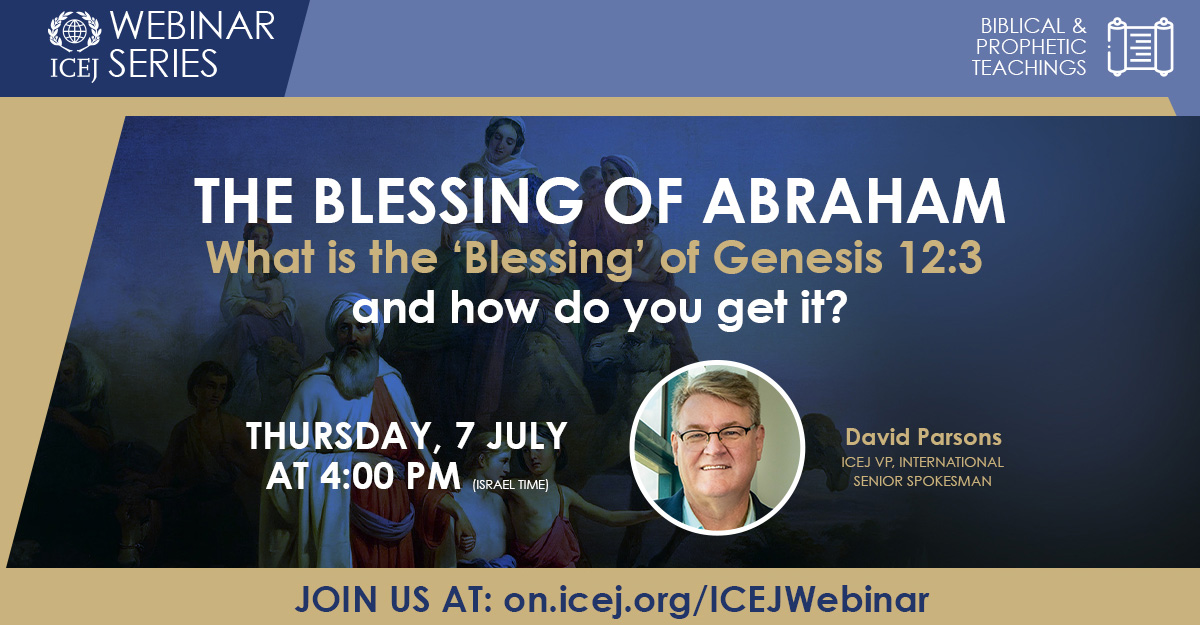 “And the Scripture, foreseeing that God would justify the Gentiles by faith, preached the gospel to Abraham beforehand, saying, “In you all the nations shall be blessed.” So then those who are of faith are blessed with believing Abraham.” (Galatians 3:8-9)

Genesis 12:1-3 is a foundational passage for Christians who love and support Israel today. Ask most Christians why they stand with Israel and they will first cite Genesis 12:3 and their desire to be blessed, but then they will very quickly jump over to some favorite verses in the Hebrew prophets about Israel’s restoration in the last days. In addition, the term “bless”, or “blessing”, is used so loosely, that it has become somewhat watered down and its much deeper meaning has been lost. We also often reduce this passage to a magic formula or simple mathematic equation that if we bless Israel, we will be blessed. That always seemed a little too self-serving to me.

So, I asked myself two important questions: What is “the Blessing of Abraham” in Genesis 12:1-3? And how do I receive it?

Is it some sort of magical powder that will make me rich? And do I get it by praying for Israel, defending Israel, giving to Israel, or visiting Israel?

I found that the blessing of Abraham in Genesis 12:1-3 has a much higher meaning than many Christians realize. It is the origins of the Abrahamic Covenant and that initial unveiling of God’s redemptive plan for the whole world. In fact, the Apostle Paul in Galatians 3:8-9 refers to these verses as the first preaching of the Gospel. So, we best spend some time there to better understand its full significance and meaning.

First, note that God says “get up and go to a land I will show you.” It took faith and a lot of effort for Abraham to just come take a look. But once he got here, God said he was going to give him the entire land. Thus, Abraham is considered the Father of faith in the one true Creator God.

Second, what does “bless” or “blessing really mean? Baruch in Hebrew. Generally, it means “to speak well of” or “to wish well.” But the Bible clearly defines the word “bless” in its highest meaning …

Romans 4:3-8 For what does the Scripture say? “Abraham believed God, and it was accounted to him for righteousness.” Now to him who works, the wages are not counted as grace but as debt. But to him who does not work but believes on Him who justifies the ungodly, his faith is accounted for righteousness, just as David also describes the blessedness of the man to whom God imputes righteousness apart from works: “Blessed are those whose lawless deeds are forgiven, and whose sins are covered; Blessed is the man to whom the Lord shall not impute sin.”

So, the “blessing” that came upon Abraham in Genesis 12:1-3 was a blood covering over his sins, which came upon him because of his faith and hope in the sacrifice of the Messiah to come. And once that covering was there, God could bless and multiply and increase him in so many ways, until he became quite wealthy.

This is the first preaching of the Gospel, that the righteousness which comes by faith covers your sins and that through Abraham’s descendants, this covering would be offered to all the families of the earth.

From the start, God did not hide this plan of salvation offered to all humanity. Nor did He make it exclusive to Israel. The promised Redeemer would come from Abraham’s “seed” for all mankind.

This blessing over Abraham helped provide for and protect Abraham and his descendants as they journeyed down through time to carry out their redemptive mission. Balaam ran into it when he was asked by King Balak to “curse Israel.” We see it in Numbers 23:7-8, Numbers 23:18-24, and Numbers 24:9. Even though Balaam wanted the money and honor offered by Balak, he could not curse Israel because of this covering and shield over them. It was only when he counseled Balak how to make Israel stumble through adultery and idolatry that this hedge was breached.

Now, if the “Blessing of Abraham” is ultimately a blood covering over his sins, how do you and I get that blessing? Is it by praying for Israel, giving to Israel, defending Israel, or visiting Israel? Here again, the Bible speaks plainly about how we receive the Blessing of Abraham…

Galatians 3:13-14 Christ has redeemed us from the curse of the law, having become a curse for us (for it is written, “Cursed is everyone who hangs on a tree”), that the blessing of Abraham might come upon the Gentiles in Christ Jesus, that we might receive the promise of the Spirit through faith.

That highest ‘blessing’ which came upon Abraham can only be obtained by us at the foot of the Cross! This is the Gospel, which was first preached to Abraham and promised to all the families of the earth.

Because we have received eternal salvation through Jesus and the Jewish people, we ought to be grateful to them and give back. I pray for Israel, I give to Israel, I stand up for Israel, and I visit Israel, not to squeeze something more out of them, but because of what I have already received from them through Christ. This is indeed the message of Paul in Romans 15:27…

It pleased them indeed, and they are their debtors. For if the Gentiles have been partakers of their spiritual things, their duty is also to minister to them in material things.

We will never be able to repay all that we received through Israel, but Paul says we should at least try.