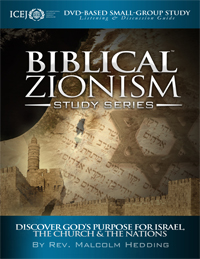 When Malcolm Hedding was a young minister in his native South Africa, he determined to stand up against the evils of apartheid regime – a sytem of government that dehumanized some 35 million people based on the color of their skin.  Yet, he didn’t do so by forming a political party or seeking elected office. Instead, he confronted apartheid from the pulpit, denouncing the theological belief system that kept it in place. In so doing he preached on the doctrine of human dignity from passages such as Ephesians 2 and Romans 10.

At the heart of South African apartheid  was a deviant form of replacement theology: the idea that Christians are the ‘new Israel’ and must be segregated from the ‘lesser’ pagan peoples that live in the world around them. It is a theology that in its more common forms disinvests the Jewish people of any enduring purpose or role in the redemptive plan of God.

Ideas have consequences and, according to  Rev. Hedding, (who for nearly 11 years served as ICEJ Executive Director in Jerusalem), the various strains of replacement theology have birthed untold evils on earth: from slavery to segregation, apartheid to anti-Semitism.

Yet, today this belief system is once again gathering traction in  the Church, influencing a new generation of leaders who see Christian Zionism as a touchstone of everything that is wrong with the traditional evangelicalism of the previous generation. Christians, right across the denominational spectrum need to be equipped with the theological understanding to make an informed, balanced and biblically articulate defense of Israel.That’s why we’ve launched a 16-part small group study series based upon Malcolm Hedding’s  Foundational Teaching Series – a set of teaching materials that have been distributed in  numerous languages across the world.
Download sample chapter: ‘Basis of Christian Support for Israel’ (pdf) »
With an in-depth 100-page study guide and four newly remastered teaching DVDs, Biblical Zionism is a unique resource for small groups and Sunday School classes alike.
If you would like to be able to dismantle the theological myths that underpin the rising assault against Israel or simply bring a deeper and more balanced understanding of Christian support for Israel to your church, home group or Bible study, this study series is for you.Order your copy today »