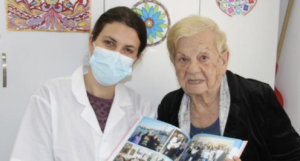 As Israel marked ‘Yom HaShoah’ this week, its annual Holocaust Remembrance Day, several Israeli media published or broadcast feature stories on the ICEJ’s Home for Holocaust Survivors in Haifa. The Israeli daily Ha’aretz published a very warm article on the Christian volunteers working at the Home. Here are excerpts…

As a teenager during World War II, Debora Wanner’s German grandmother led a Hitler Youth group in the small town of Ettlingen. Now, for almost two years, Wanner has been volunteering as a physiotherapist at the… Haifa Home for Holocaust Survivors [operated by Yad Ezer La-Haver and ICEJ].

Wanner says that her grandmother’s world came crashing down after the war. She came away with a determination never to be led blindly by others again, and to be a friend to the Jewish people and to Israel. She became a Christian, visited Israel and instilled a love for the Jewish state in her family.

Wanner is one of three German Christians volunteering at Haifa Home who decided not to return to Germany at the onset of the COVID-19 pandemic. They stayed behind knowing that if they were to leave, the home would not be able to replace them. Geriatric nurse Natalia Ochs, 52, has been volunteering for 2.5 years at the Haifa Home. Kerstin Hoffman, 23, came for a year of volunteer work through a German government program after completing her ophthalmology studies, and left the program in order to remain in Israel for another year when the pandemic broke out. 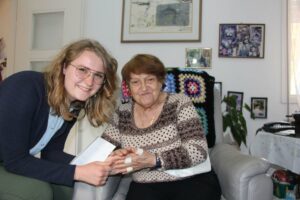 Ochs, who was born in Russia to a German father, has lived in Germany for 24 years, and perhaps cleared the way for the other long-term volunteers. Able to speak both Russian and German, she communicates easily with the residents, whom she visits daily.

In the apartment of 93-year-old Sofie Leibowitz, she checks blood pressure and looks over Leibowitz’s readings. Ochs recalls that the first time she came to Leibowitz’s apartment to introduce herself, the woman closed the door in her face, saying she did not need any help. In time, she came to value Ochs’ company.

“I am happy I can speak to her, not everyone knows German,” Leibowitz says.

The volunteers give them a lot of love, and the survivors return that love, she adds. Both of Leibowitz’s parents died in the Transnistria detention camps, where Romanian Jews were sent during the Holocaust. An estimated 275,000 to half a million Jews were killed by starvation, disease, death marches and mass executions in these camps.

The backgrounds of those who volunteer with the survivors at the Haifa Home are irrelevant, she says.

“They are not guilty of anything. It was their parents or grandparents. It’s been almost 80 years. We’re already passed that here in Israel,” she says. “We don’t think about their religion. We need their help and they help us.”

Shimon Sabag, founder and director of the Yad Ezer La-Haver charitable organization, opened the Haifa Home in 2008, after noticing that an increasing number of Holocaust survivors were coming to the organization’s soup kitchen for free meals. Sabag, whose Greek mother survived Auschwitz, set up the home to provide senior care for survivors in need…

One of the first precautions taken during the pandemic was distancing from senior citizens, which put a halt to individual visits with Holocaust survivors. Only a handful of the volunteers where able to continue their work in nursing homes… Israel’s rapid vaccine rollout has now allowed the volunteers to meet with survivors once again.

“This is very important in my heart,” says Wanner. She is affectionately called “Devoraleh” by Fanny Zelekovic, 92, as Wanner gently massages her limbs to alleviate pain from severe arthritis.

“She is like family, like a sister,” Zelekovic says. “She has a heart of gold.” Zelekovic can still remember being taken out of school in Romania at age 7, and not being permitted to go out on the street. So many years later, she still feels the sting of a slap from a Christian friend before she left school. She hid with her mother and brother – her father sought shelter separately – to escape the Nazis and their Romanian collaborators.

After the war, they eventually made their way to Haifa, where Zelekovic raised her family. Today, she counts 19 great-grandchildren. “I don’t care if a person is Turkish, Spanish or German,” she says. “The important thing is that they be a human being. What is she responsible of, for what other people did?”

Wanner admits that she was initially apprehensive of how she would be received by the survivors, “but from the first day I felt welcomed and even loved,” she says.

Last year, during the home’s Holocaust Remembrance Day ceremony, Wanner tried to remain unobtrusive, but then two survivors beckoned her to sit in an empty chair between them, calling her “one of ours.”

“That made me cry. They really included me,” she says.

One quarter of [Holocaust] survivors in Israel are estimated to be living in poverty. As they age, many survivors are reliving childhood traumas and need more specific attention, Sabag says.

In 2010, Sabag reached out to various organizations for funding for the Haifa Home, and the International Christian Embassy Jerusalem was the only one to respond. Sabag partnered with the Christian Zionist group, which raised money to buy the first floor of the home’s first building. Several groups of German handymen helped with the renovations through the organization, and a Finnish woman affiliated with the group volunteered at the house as a long-term nurse.

The Christian Embassy’s Haifa Home coordinator, Yudit Setz, originally from the Netherlands, moved to Haifa in 2018 from Jerusalem where she had been volunteering with the ICEJ since 1985, and started managing the arrival of additional volunteers. About 40 more handymen from the United Kingdom, Germany and Switzerland volunteered their renovation and repair services for the existing apartments.

The following year, Setz brought in the current trio of long-term volunteers, and is now recruiting for the next group through the International Christian Embassy Jerusalem branch in Germany and World Wide Volunteers, which works with the German government.

“The volunteers do amazing work. I have never seen anything like it,” Sabag says. “They live close to us, on a day-to-day basis with the survivors. For a woman to leave her home and come here to volunteer, she comes with a strong desire to give and does her work with all her heart,” he adds.

“I felt a deep call to help Holocaust survivors. I knew I could really help the people here,” says Ochs. “For me it is a miracle that I work here.”

Sometimes, she says, just listening to the survivors tell their stories is more valuable than any medical help she can provide. She knows they are entrusting her with an important part of themselves, and she is contemplating how she will pass on those memories to others.

The number tattooed on 92-year-old Yudit Herzkowitz’s forearm has faded, but her memories have not. At 13 years old, she was separated from her mother, grandmother, and younger brother when they arrived at Auschwitz. Her father was sent to work in coal mines in East Germany and died in 1944. She remained in the concentration camp for six months with her sister, who was a year younger than her. Herzkowitz was then taken to work in a factory; her sister was not. Having lost her entire family save for one aunt, Herzkowitz came to Israel alone.

“You can’t generalize,” she says, sitting next to Ochs underneath a wall lined with photos of great-grandchildren, of which she has 13. “There was a German nurse who helped me when I was liberated. Natalia comes to me twice a week and very much wants to help. If the volunteer asks me about my story, I tell them. But I don’t talk. I don’t look at the number.”

“It is not easy to begin the relationship, but with time they open themselves up more and more,” Ochs says. “This is why I know I am in the right place. People open up to me and there is a small broken child I can take care of like a mother. When some of the survivors have passed away, I saw this peace in their eyes.”

Petite and lively, Chaya Caspi, 88, has been waiting for her daily visit from Kerstin Hoffman. The youngest of the volunteers, she is a general helper – she brings the residents their mail, and helps them with errands and medical appointments.

“Kerstin came yesterday and made tea and brought strawberries,” says Caspi, clasping Hoffman’s hand. With a daughter in Atlit and a son in Australia, Kerstin’s daily presence is a big help, she says. “Whenever I need something, I pick up my mobile phone and I call Kerstin.”

“I grew up in a Christian home so as a child Israel was always a topic, to support and bless Israel,” Hoffman says. “I don’t know if we can repair what has happened but we can build up a new relationship. For me the best thing is to help them; they are in their last years.”

She knows that in the years to come, it will be up to people like her, who have lived with survivors and heard their stories, to carry on their testimony. Bearing witness, as a non-Jew, may even be more crucial.

“I am honored when they open up and tell me the details of their story,” she says. “Sometimes they say they were the only one of their family to survive. I tell them I am glad they are here now and that I can hear them tell their story.”

Caspi was 8 years old when Romanian collaborators took away her father and two older brothers. Her father made it back home, but her brothers never returned. She, her parents and two other siblings survived the Transnistia camps and came to Israel. Enlarged photographs of her two older brothers hang on the wall across from her bed.

“What, is she responsible for what her grandfather or others did?” says Caspi, leaning into Hoffman and patting her hand. “She relates to me. To her, I am not invisible.”

Be part of this amazing work by supporting the Haifa Home.