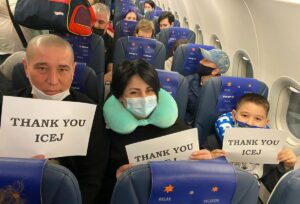 A group of 102 Jewish immigrants arrived in Israel on Sunday evening on a special Aliyah evacuation flight from Kazakhstan arranged by The Jewish Agency for Israel and sponsored by the International Christian Embassy Jerusalem.

Their Aliyah comes at a particularly difficult time due to corona-related health guidelines and travel restrictions, including obtaining visas and permits for flights, so the arrival of today’s planeload of olim (newcomers) from Alma Ata is a small miracle, noted one JAFI official.

Many of these new arrivals had been planning to make Aliyah months ago, but were delayed by lockdowns and global travel bans. After landing at Ben-Gurion Airport, they will be required to undergo quarantine and other measures due to corona health regulations in Israel.

Among the new arrivals is a Kazakh Jewish family with two sons who already came to Israel on study programs for high school students and completed their IDF service with distinction as lone soldiers. The mother is a journalist who worked in the past with the Israeli newspaper Mabat and as a Jewish Agency representative in Kazakhstan. She is especially excited to be closer to her grandchildren in Israel, as well as her younger sister who lives with her family in Hadera.

Another new couple is coming with their nine year-old daughter. He has degrees in engineering and economics and has worked with Volkswagen, while she has been as working as an actress, theatre teacher and TV presenter.

Another young Kazakh Jewish immigrant spent time studying abroad in London and is planning to teach English and continue his Torah learning in Jerusalem. He also is coming to reunite with his grandparents, who have already lived in Israel since 1998.

Even with most international travel still disrupted due to COVID-19, Israel and the Jewish Agency in cooperation with the ICEJ have been working to arrange emergency flights for Jewish immigrants from various regions around the world. Interest in Aliyah is actually on the rise, as many Jewish families worldwide now view Israel as safer health-wise and better positioned for economic recovery than other countries. Israeli officials anticipate up to 250,000 new Jewish immigrants to arrive over the next three to five years.

The Christian Embassy has now supported aliyah flights for over 880 Jewish olim since the start of 2021, including some 500 Ethiopian immigrants as part of “Operation Rock of Israel.” 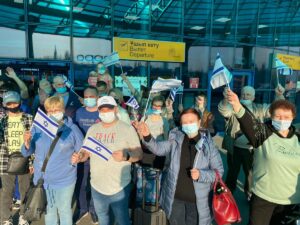 “We are excited to help bring another large flight of Jews making their way home to Israel,” said ICEJ President Dr. Jürgen Bühler. “Despite the corona pandemic the Aliyah has not stopped, and we are especially honored to be a part of the return of so many Jewish families to the Land of Israel during this unusually difficult season. We know their lives will never be the same, and we wish all these new arrivals great success in finding their place in the Jewish homeland.”

Since its founding in September 1980, the International Christian Embassy Jerusalem has now assisted over 160,000 Jews in making Aliyah to Israel from some 36 countries worldwide. With your support, we can continue to bring Jewish families back home.