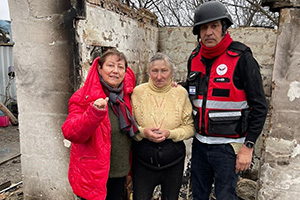 For more than six weeks now, the International Christian Embassy Jerusalem has been assisting Israel to take in a massive wave of thousands of Jews uprooted by the brutal war in Ukraine. We need your help to bring more of these endangered Jewish families to safety in Israel, and to assist those already here with the long process of integrating into Israeli society.

The ICEJ has been involved at all stages of the current surge in Aliyah from Ukraine, from helping to field the first phone call by potential immigrants on a special emergency hotline for Ukrainian Jews, to transport, temporary housing and flights on their way to Israel, and finally to help them get settled in the Land.

So far, over 7,000 Jewish war refugees from Ukraine have arrived in Israel in just a few weeks. Thousands of Russian Jews have fled to Israel as well, driven out by the sinking economy and loss of freedoms there.

Many of the ICEJ’s efforts to help with this urgent wave of immigration are being done through our support of the Jewish Agency for Israel, which is supervising the overall Aliyah operation. This includes our sponsoring of flights for 620 of the new immigrants to date. Our remaining efforts are being carried out in cooperation with other partners on the ground in Ukraine, in nearby countries, or in Israel.

One special operation we have undertaken is to evacuate Holocaust Survivors from besieged cities in Ukraine and bring them safely to Israel as quickly as possible. Working with a courageous rescue team in Ukraine, the Christian Embassy has helped to extract over 60 Holocaust Survivors and counting. Through our European branch offices, we also have delivered several tons of relief aid to Jewish war refugees in Warsaw, Poland. And the ICEJ has handed out welcome baskets to hundreds of Ukrainian Jewish families who have already reached Israel.

Normally, Jewish families making Aliyah have time to plan out their move to Israel. But the fighting in Ukraine has forced thousands of Jews to make hasty life-and-death decisions, often while on the run. They have arrived in Israel with very little, and many had to leave their husbands and fathers behind while the war is still on.

After landing at Ben-Gurion Airport, these new Ukrainian immigrants are being placed in hotels or moving in with relatives while local municipalities prepare more permanent housing for them. But soon enough they will have to fend for themselves, learn the Hebrew language, and try to find jobs to support their families.

We want to be there for these newcomers to Israel, who had to flee a horrific war with so few possessions and now must make their way in a new country. We are especially concerned for the dozens of Holocaust Survivors who we have helped to escape the fighting in Ukraine but are now dependent on others as they seek to live out the remainder of their lives here in Israel. Please help us care for their special needs going forward.

At the same time, Israel is preparing to launch its planned airlift of some 3,000 Ethiopian Jews, with the first flights hopefully arriving over the Passover holidays next week. The ICEJ has committed to assisting JAFI with this important Aliyah operation as well.