The Biden ‘two-step’ on Jerusalem 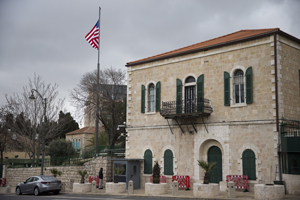 The new Israeli government’s efforts to build relations and reach a common agenda with the Biden administration got off to a rocky start when Prime Minister Naftali Bennett visited Washington in August but found US President Joe Biden too distracted by his botched Afghanistan exit to listen to Bennett’s list of concerns. Since then, Foreign Minister Yair Lapid and Defense Minister Benny Gantz have been meeting with senior US officials and some positives have started to emerge, such as reports that the Biden team is encouraging Saudi Arabia to join the Abraham Accords and normalize relations with Israel. But a lingering disagreement has arisen on the thorniest issue of all – what else but ‘Jerusalem.’

Biden wants to reopen a consulate building on Agron Street (pictured at left) in western Jerusalem which served in the past as the chief US representative mission to the Palestinians. This unique role as an independent consulate to the Palestinian Authority in Ramallah answering directly to the State Department was ended by former US President Donald Trump in 2019 as part of his efforts to correct several anomalies in the American approach to the question of Jerusalem. The consulate’s staff was folded into the new US embassy a few blocks south in the Arnona neighborhood – a move the Palestinians viewed as part of a general downgrade of their ties with the US by Trump.

But in their recent talks in Washington, Lapid warned US Secretary of State Antony Blinken that US plans to reopen the consulate could risk toppling the fragile Bennett-Lapid government, which includes right-wing parties that may not be willing to accept such a move. Lapid reportedly contended that reopening the US consulate in Jerusalem to serve the Palestinians will encourage other nations to do the same, thus undermining Israel’s sovereignty over the city.

Blinken has responded by offering to set up (what else?) a committee to resolve the dispute. He is hopeful such a panel will allow both sides to discuss the matter discreetly and come to a mutual resolution. The move also is meant to buy time for the Bennett-Lapid government to finally pass a state budget – which Israel has been lacking over recent years due to so many repeat elections.

US officials say that reopening the consulate is part of Biden’s pledge to restore relations with the Palestinians after Trump’s cold shoulder towards them. Interestingly, they also are pointing to around ten other countries already operating consulates in Jerusalem which serve the Palestinians. Such an argument reminds us once again of the international community’s blatant hypocrisy on the issue of Jerusalem.

In December 2017, Trump made a principled and historic decision to finally give Jerusalem its due recognition as the capital of Israel, and to move the American Embassy there. This decision was backed by four decades of overwhelming bi-partisan support for such a move in the US Congress, including its landslide passage of the 1995 Jerusalem Embassy Act. It also was in keeping with the campaign promises of the three preceding US presidents, who all reneged on those promises.

Yet just days later, the United Nations General Assembly passed a resolution which demanded that the US withdraw its recognition of Jerusalem as Israel’s capital and explicitly called upon all nations “to refrain from the establishment of diplomatic missions in the Holy City of Jerusalem.”

Among the nations voting for this resolution were Belgium, France, Greece, Italy, Spain, Sweden, Turkey, and the United Kingdom – all of which were instantly in violation of its very terms, as they each have embassies or consulates in Jerusalem which openly serve as their chief diplomatic missions to the Palestinian Authority.

It is sheer chutzpa for the Biden administration to now point to these diplomatic missions as grounds for opening up their own. If they want to send a diplomatic envoy to represent the Biden presidency to the Palestinian Authority, then they should set up shop in Ramallah – where dozens of foreign embassies and consulates are now located.

What this has exposed once more is the international community’s jaded ‘game’ on Jerusalem. For decades, they have used every excuse and pretext to deny the Jewish State and people their rightful place and claim to Jerusalem. They know Israel is legally and historically the rightful sovereign in Jerusalem, but they seek to withhold recognition of this reality in hopes of forcing Israeli concessions to the Palestinians in other areas.

The most often cited pretext in this game is that all sides should remain “even-handed” concerning the long-standing dispute over Jerusalem until its final status is determined in direct talks between Israel and the Palestinians. To that end, they insist that no country should be placing their embassy to Israel in Jerusalem.

In recent years, some of the larger European Union nations have even leaned heavily on their new member states from Eastern Europe to keep them from following Trump’s lead to open embassies in Jerusalem – lest they “prejudge” the outcome of negotiations over the city. Yet the whole time, they have had embassies and consulates to the Palestinian Authority located in Jerusalem – some even in western Jerusalem. And they routinely vote for UN General Assembly and Security Council resolutions which declare eastern Jerusalem to be “occupied Palestinian territory” – see, for example, UNSC resolution 2334. How is that even-handed?

Should the Biden administration continue this charade by reopening the Agron consulate, they will be taking us one step backwards on Jerusalem and two steps backward on peace.