How has Israeli Technology Revolutionized the World

Developments that have transformed our everyday lives 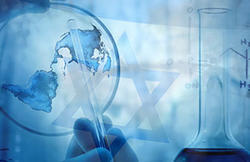 What do text messaging, drip irrigation, and the latest flu vaccine have in common? Like so many other life-changing innovations, they were invented in Israel.

Israel’s story is an unlikely, yet inspiring one.

Despite continuous wars and virtually no natural resources, Israel has transformed itself from a small developing country into high-tech nation in just 67 years, paving the way for developments that have transformed our everyday lives.

In medicine, Israeli doctors, researchers, and inventors are saving and changing lives, with innovations that range from an exoskeleton that allows paraplegics to walk again, to a drug that reduces the symptoms of Parkinson’s disease, to next-generation cancer therapies.

Israel’s high-tech sector has revolutionized communications. AOL instant messaging, Intel’s computer processors, texting, voicemail, and the technology that powers your cell phone were all created in Israel. So was online streaming technology and the Amazon Kindle e-reader. Most major American technology companies –from Facebook to Google to Microsoft–take advantage of Israel’s intellectual talent with research facilities on the ground in the Jewish State.

Israeli irrigation techniques have improved farming from Africa to Alabama. Its green and clean technology – from solar to wind to water desalination – has made the world a healthier place, helping to address major challenges, like California’s recent draught and hunger in Southeast Asia.

As Israel’s first Prime Minister David Ben-Gurion said, “To be a realist in Israel, you must believe in miracles.” Undoubtedly, the Israeli people’s unique grit, incredible creativity, and can-do spirit has not only built a thriving Jewish State, but also generated countless innovations that have changed our lives.