When Jesus Attended The Feast Of Tabernacles 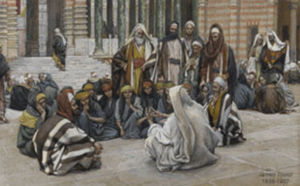 For centuries Christian churches had little appreciation for the biblical Feast of Tabernacles. They understood Passover was the foundation for Jesus’ atoning death on the cross, and they understood Pentecost, or the Feast of Weeks, was a Jewish feast on which the Holy Spirit was poured out on the early church. But, there was no Christian fulfillment of the Feast of Tabernacles for them to celebrate.

This is because the Feast of Tabernacles is a forward looking Feast with a yet future fulfillment. The founders of the International Christian Embassy Jerusalem (ICEJ) understood this and how that the prophet Zechariah had foretold of a day when all the nations of the world would celebrate the fulfillment of this Feast. Therefore, they began an annual Christian celebration in Jerusalem in 1980. Some thirty-six years later churches all around the world now celebrate the Feast of Tabernacles in anticipation of its ultimate fulfillment when Jesus returns and the Kingdom of God is established in our midst.

Jesus also celebrated the Feast of Tabernacles and we read about that in John 7 – 9. While there, He used the special ceremonies taking place around Him to point the people to Himself as the ultimate fulfillment.

Each day of the seven-day Feast began with a water-drawing ritual which was a great time of rejoicing over God’s provision of water for the crops that year and of the Holy Spirit which would provide personal refreshment. A priest would take a golden pitcher and lead a musical procession to the pool of Siloam where he plunged the pitcher into the waters while reciting “Therefore, with joy you shall draw water from the wells of salvation” (Isaiah 12:3).

Jerusalem’s sole water supply was from this pool and the Gihon Spring that feeds it. Therefore, water was precious. Yet, the priest returned to the Temple with the golden pitcher of water and began to pour it out over the altar while reciting “Hosanna, I pray, O Lord… send now prosperity!” (Psalm 118:25). The pouring of the water symbolized the pouring out of the Holy Spirit and was followed by a great silence that descended on the sanctuary as the people reflected upon the Holy Spirit–the only true refreshment for their thirsty souls.

This ritual took place every day but on the seventh day it took on an intensity filled with excitement and anticipation. It was on that day that Jesus “stood and cried out, saying, ‘If anyone thirsts, let him come to Me, and drink’” (John 7:37). In this context it was clear to the people that He was inviting them to accept Him as the one who would give them the “living waters” of salvation (John 4:10).

Another fascinating ceremony associated with the Feast of Tabernacles involved lights. Each afternoon four huge menorahs illuminated the court of the Temple and the pious men would dance before the lamps with burning torches in their hands. It is said that the light from these menorahs was so bright it penetrated every courtyard in Jerusalem. This festivity would last all night until dawn.

The light of the menorahs had two meanings: the first was symbolizing the Glory of God that had filled the first Temple (I Kings 8:10-11). The second was anticipating the “Great Light” who would soon come and bring light to those who were spiritually dead and dwelling in darkness (Isaiah 9:2).

Perhaps it was during the light celebration, or when the lights were extinguished on the eighth day, that Jesus said for all to hear, “I am the light of the world; he who follows Me shall not walk in darkness, but have the light of life” (John 8:12). The crowd understood that Jesus was proclaiming that He is the Great Light who Isaiah said would come, and is God in the flesh–the Glory of the Temple (John 1:14).

He Affirmed Who He Was

The eighth day of the Feast of Tabernacles was called the “Last Good Day.” It was a Sabbath day, designed for rest and reflection on all that had been celebrated during the previous seven-day festival. On this day Jesus came to the Temple and healed a blind man by anointing his eyes with clay and then sending him to the pool of Siloam to wash (John 9:7).

With this miracle Jesus validated everything He had said and done during the Feast. By doing the impossible, He proved He was God in the flesh–the true dispenser of the Holy Spirit and the only source of light and life.

Susan M. Michael is US Director of the International Christian Embassy Jerusalem.