The Controversy over the Temple Mount 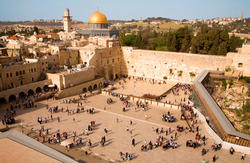 The biblical, historical, and future significance of the Temple Mount makes it the most hotly contested piece of real estate in the entire world. An example of the extreme sensitivity over ownership of the site is that Jews and Christians are not allowed to pray there. The Jewish place of prayer, where Christians are also welcomed, is below the Temple Mount facing the outer retaining wall of the complex known as the “Western Wall.”

I witnessed this tension firsthand a few months ago when we took a tour group onto the Temple Mount. We were followed and even questioned by special guards whose duty it was to make sure that our Christian group was not praying. Likewise, I saw a Jewish visitor surrounded by guards to make sure he did not pray and to escort him safely outside the gates of the compound.

This site is holy to three religions, yet only the adherents of one of those religions can actually pray there. This is discriminatory and insulting, but also part of a larger effort to rewrite the history and significance of the Temple Mount.

For Jews and Christians there is no question that both Solomon and Herod’s Temples were built on Mount Moriah, or what is today called the Temple Mount. Not only is the Bible clear about this but archaeology confirms it.

Some of the archaeological finds include an engraved stone marking the southeast corner of the Mount where trumpets announced the beginning and the end of the Sabbath as described by the Jewish historian Josephus. Another stone was discovered in 1871 along the northeastern corner of the Temple Mount, and is now housed in the Istanbul Archaeological Museum in Turkey, on which a Greek inscription warns Gentiles not to proceed past the wall that defined the court of the Gentiles in the Temple. There are a number of other significant finds that support the biblical history of the area.

But, the Muslim world neither regards the Bible as accurate, nor appreciates non-Islamic history. What is worse, they will destroy archaeological evidence that disagrees with their distorted historical account. For the last 10 years, the Temple Mount Sifting Project has been recovering precious Temple artifacts that were discarded as debris during the construction of a mosque on the Temple Mount platform.

It is not surprising that UNESCO just adopted a resolution on safeguarding Palestinian heritage, proposed by several Muslim countries, which referred to the Temple Mount only by the Muslim name, Aqsa Mosque, or by the Arabic, Al-Haram Al-Sharif. The resolution, which totally ignored the Jewish history of the area, was approved by 33 states, including France, Russia, Spain, and Sweden. Seventeen countries abstained, while six voted against it: the United States, Estonia, Germany, Lithuania, the Netherlands, and the United Kingdom.

This growing campaign of Temple Denial is considered a serious enough threat to Israel and the Jewish people that it was mentioned by Prime Minister Netanyahu in his speech on Israel’s Holocaust Remembrance Day, Yom Hashoah. He knows that if a godless world can erase Jewish history from the Temple Mount and deny all of the biblical, historical and archaeological evidence to the contrary, then they will have erased the Jewish significance of Jerusalem itself.

The fact remains that the Jewish history of Jerusalem is our own Christian history. The Jewish scriptures are part of the Christian Bible, and Jesus came into the world in a Jewish context as the Jewish Messiah. He frequented the Jewish Temple on Mt. Moriah and most probably entered by way of the massive southern steps now uncovered by archaeological digs. If the Christian world does not stand up for the Jewish connection to Jerusalem, then one day we will discover that our own historical and spiritual connection to the Holy Sites there has also been erased.

The ICEJ was formed in 1980 for this very reason. When the nations of the world sought to deny this historical connection and refused to recognize Jerusalem as the capital of Israel we stood up. We have been representing Christian solidarity with the people of Israel and their connection to the city ever since.

Zechariah 12:2-3 predicts a day when Jerusalem will become such an international controversy that the nations will gather against her. Thus, it is no surprise to see that this tension has been growing over the last 70 years and shows no signs of letting up. It is our duty as Christians to stand for the truth and to stand with the Jewish people and their connection to Jerusalem.