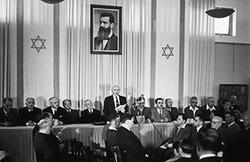 The Palestinian Liberation Organization Charter states that “Zionism is a colonialist movement in its inception.” This claim – echoed by many throughout the Middle East and beyond – asserts that Israel was founded illegally

The truth is that Israel’s founding had a firm basis in international law – and thousands of years of history. Jews have maintained a continuous presence in and connection to the land of Israel for more than 3,000 years.

Jerusalem has been the Jewish people’s capital for more than three millennia: the city is mentioned almost 700 times in the Hebrew Bible and more than a hundred generations of dispersed Jews prayed three times a day to return to Jerusalem. The Jews’ connection to the Land of Israel is further confirmed in the sacred texts of Islam and Christianity.

In 1917, the British Government issued the Balfour Declaration, which explicitly called for the “establishment in Palestine of a national home for the Jewish people.” Following World War I, the British Mandate of Palestine gave Israel the legal right, based on international law, to become a sovereign nation under the oversight of Great Britain. In 1920, the San Remo Conference took place with all members of the future Arab League in attendance, transforming the Balfour Declaration from a letter of intent to a legally binding foundational document. The outcome of San Remo was approved by the entire 52-member League of Nations in 1922 and in 1947, the UN general assembly adopted a resolution calling for a sovereign Jewish State in former British Palestine. In 1949, Israel was admitted into the United Nations with a majority vote.

In short, anybody who says that Israel was illegally founded needs to get their facts straight.