The Lord My Stronghold

A Look into Israel’s Physical and Spiritual Fortresses 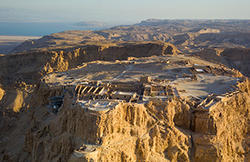 “The Lord is my rock and my fortress and my deliverer; My God, my strength, in whom I will trust; my shield and the horn of my salvation, my stronghold” (Psalm 18:2 NIV).

Psalm 18 is said to be a Psalm of David that was written when the Lord delivered him from the hand of Saul. We read about just such a day in 1 Samuel 24:22 where it says that after Saul and David made an agreement that “…Saul went home, but David and his men went up to the stronghold.”

A stronghold during the time of the Israelites was a naturally elevated rock formation or mountain that offered protection and a place of safety. When David was hiding from Saul, he dwelt in the “strongholds” at Ein Gedi, an oasis fed by a waterfall descending from the barren mountains alongside the Dead Sea. There are many caves visible high on the cliffs above Ein Gedi similar to the ones in which David may have hidden.

But, in 1 Samuel 24:22, it says that David went up to “the stronghold,” indicating that there was one stronghold that everyone knew about that stood out amongst all the rest. It is possible that stronghold could have been the 1,300 foot high rock plateau, overlooking Ein Gedi, that is known today as Masada (fortress). There is no way to know if it is the stronghold David dwelt in, but there is no better example of what David meant when he described the Lord as his stronghold.

Masada has a history almost as rugged and deadly as it looks. It was the first site Herod the Great fortified after he gained control of his kingdom. He built a three-tiered palace down the cliffs on the northern edge of Masada that included a swimming pool, Roman bath, and throne room. The entire fortress was self-sufficient with cisterns, aqueducts, agricultural plots, storage rooms, servants’ housing, and a synagogue.

But, Masada is best known for the dramatic last stand of a small band of Jewish zealots who had fled there from Jerusalem in 70 AD after the destruction of the Temple by Roman forces. Some 900 zealots lived there and resisted Roman rule until 73 AD when a Roman legion laid siege to Masada building a large siege ramp so a battering ram could reach the wall around the fortress. Once the Roman assault began to penetrate the wall, the Jewish resistance ended in a mass murder-suicide leaving only seven survivors, two mothers and five children who hid in a cistern.

When archeologists first excavated the site in the 1960’s, they found many scrolls stored in the synagogue, but the scroll that had been taken out for the last teaching of the zealots was Ezekiel 35-38. In those chapters the Lord speaks judgment on the surrounding nations for their treatment of His people. He also promises to regather the Jewish people back to their land in a time of blessing and peace. In chapter 37 that future rebirth of Jewish sovereignty on the land is described as dry bones coming back to life from the dead.

These zealots took their lives in utter hopelessness, choosing death over a life of slavery to the Roman oppressors, yet knowing that one day God would fulfill His promises and raise up the nation even if from dead, dry bones. This is why Masada is such a moving place to visit today.

But, the real lesson of Masada is found in the life and words of David. He benefited greatly from the great strongholds of his day and hid in them for his physical protection. In spite of this David did not put his trust in earthly strongholds. He knew that God was his true stronghold, and only in Him could he trust.

As we visit the magnificent mountain stronghold of Masada, we are reminded of how strong and mighty our God is, like a high tower that we can run to for safety in times of trouble. Lastly, we are reminded that even though a physical stronghold as fortified and protective as Masada cannot be trusted, our God can be trusted in all things.