What Does Israel Do for the World? 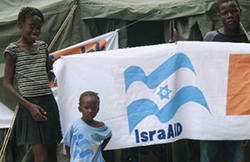 Israel is a small country making a big difference for others around the world. In 2010, disaster struck Haiti, as a catastrophic magnitude 7.0 earthquake ripped across the island, killing more than 100,000 people. Shortly after, a team of 240 Israeli doctors, nurses, and relief workers arrived in Haiti and were the first to set up a fully equipped field hospital in Port-Au-Prince. This ultimately saved hundreds of lives.

For Israel, this is par for the course. From Japan to Nepal to the Philippines, Israeli doctors and rescue teams have been the first on the scene to help when disaster strikes and among the last to leave.

Since the 1950s – when Israel was still a developing country – the Jewish state has sent its experts to help other nations achieve prosperity. Israel has trained Senegalese lettuce farmers to use advanced drip irrigation, Ghanaian doctors how to treat malaria with minimal costs, and South Sudanese social workers how to combat sexual violence. Just recently, Israel sent medical professionals and mobile emergency clinics to high-risk areas in Western Africa to combat Ebola. Israel sees this work as a moral duty based on Jewish values.

While Israel is technically at war with Syria, this has not stopped its armed forces and civil society groups from providing desperately needed medical aid to refugees from the Syrian civil war. Since 2013, hundreds of Syrians have been treated in Israeli hospitals. Sadly, Syrians who receive treatment in Israel must guard their identity closely so they are not branded as “collaborators” and faced with even more danger when they return home.

In short, Israel is the Jewish State: it breathes life into the core values of the Bible by helping the people around the world who need it most.