Where nothing comes easy, and faith and obedience are required 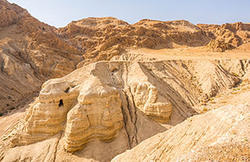 The first glimpse of the Promised Land that the Israelites had from the east side of the Jordan River must have elicited a range of emotions. After 40 years of wandering in the desert, eating some unknown substance called “what is it?” (mannah), they must have been extremely relieved to be entering the land of milk and honey they had been told about.

In addition, they felt fearful knowing that there were still giants living in the land they were entering. But, the children of Israel could have also been a little disappointed. Their view from the east side of the Jordan may have encompassed the occasional oasis in the Jordan valley, but they were dwarfed by the barren cliffs of the foreboding Judean Wilderness.

The Israelites were entering a land that looked just as stark, dry and barren as the desert they thought they had left behind. It is understandable that the two tribes of Reuben and Gad asked to remain on the east side of the Jordan where their cattle could graze!

It is interesting to note that the place where Joshua and the Israelites crossed the Jordan River to enter the Promised Land is also the place where Jesus was baptized and entered His ministry, and from where Elijah ascended into Heaven. It is a special and popular place for pilgrims to be baptized today.

At first glimpse, visitors are usually disappointed in the Jordan River. They are expecting a mighty rushing river, but it is more like a small stream, and the waters are murky. In 2 Kings 5, the leprous Syrian commander, Naaman, was also shocked when the prophet Elisha told him to bathe in the cloudy, unimpressive waters of the lower Jordan. He replied that there were much better and cleaner rivers back in his country!

This part of the Jordan valley and neighboring Judean Wilderness is the part of the land of Israel that I love the most, probably because it is so different from the lush farmland where I grew up. It is stark, majestic, and overwhelming in its contrasts.

The air is so dry there that it preserved ancient sacred scrolls for thousands of years. The famous Dead Sea Scrolls, some dating back as far as 300 BC, were discovered in caves above Qumran where they had been stored in clay jars. It is possible some of these scrolls were from the Temple and had been hidden there from the Romans in 70 AD. When found over 1,900 years later, they matched the modern biblical text and proved that the Bible had not been corrupted or altered in any way.

It is no coincidence that the first Dead Sea Scroll was acquired by a Hebrew University professor within weeks, if not days, of the 1947 UN Partition Plan, which paved the way for the creation of the State of Israel. God was beginning to both prove the authenticity of the Bible and fulfill prophecy at the same time.

From the Qumran caves one can see the Dead Sea, the lowest place on earth, and the rocky cliffs of the Judean Wilderness (also called the Judean Desert) reaching up some 1,500 feet above. The Dead Sea (known as the Salt Sea in the Bible) is evaporating at such a rate that it is ten times saltier than ocean water. This salinity makes it too harsh for fish to live. It is also too dense for visitors to swim—they float on the surface of the water instead. The lowest point on earth is so far away from the sun that bathers do not have to worry much about burning.

A Land of Testing

While these contrasts and extremes make visiting Israel a fascinating experience, it also made the land a harsh place to live in. When Abraham first entered the Land of Canaan it was during such a severe famine that he went to Egypt for refuge. Isaac also encountered a drought but God instructed him to seek refuge among the Philistines near Gaza instead of Egypt. Similarly, Jacob encountered a famine and sent his sons to buy grain from Egypt, then ended up living there under the providential care and provision of his beloved son, Joseph.

Why would God give a land to the descendants of Abraham, Isaac and Jacob that had such a tendency towards drought and famine, not to mention giants! He would use it as His testing ground. It was a land in which nothing came easy, and required faith and obedience to attain the fullness of what God had promised.

Israel is no different today. God has brought His people back to their ancient homeland where they cleared malaria infested swamps, made the desert bloom, and from where they have used technology and innovation to solve their water shortage. But, they also encountered hostile resistance from the Arabs who refused to live in peace with them, and who have fed successive generations with hatred and animosity so that Israel is faced with a seemingly unsolvable situation.

I once heard someone ask an Orthodox Rabbi why God would have regathered His people back to their homeland only to be faced with decades of war, waves of terrorism, and a situation that has no solution in sight. His answer was this: “It is part of the redemptive process.”

God uses difficult places and situations to test and refine His people. If we will obey His Word and step out in faith we can overcome the obstacles life puts in front of us. This is the kind of faith that pleases God, and without which, we will fail the test. 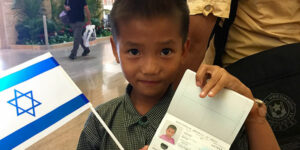 Aliyah (the return to Israel for a Jewish person) is a modern day miracle! Nearly all who return feel they truly have entered into the promises of God for their lives. Be a part of this miracle and help us bring the home! Donate Today!