Why Hasn’t There Been Peace in the Middle East? 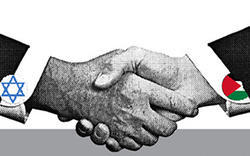 Since its establishment in 1948, Israel has fought in seven wars, been confronted with Palestinian intifadas, and suffered countless random acts of terrorism against her citizens. So, after 67 years of conflict, why is there still no peace in the Middle East? The answer is quite simple: Israel has no willing partner for peace.

For this reason the Palestinian leadership has never agreed to the basic security arrangements necessary to protect the Israeli people. Instead, if a Palestinian state were to be created tomorrow, nearly half of the Palestinian population would be ruled by Hamas – a violent terrorist organization fundamentally opposed to peace.

The Palestinian Authority also refuses to prepare their people for the future possibility of two-states living in peace. Instead, it fosters a culture of hate against Israelis and Jews in Palestinian mosques, schools, and media. Jews are demonized, Israelis are falsely accused, and Palestinian children are taught to aspire to murder them. All while consistently denying Israel’s right to exist.

If international leaders really want peace between Israel and the Palestinians, then they need to admit where the problem lies and require serious changes from the Palestinian leadership.