Why Are So Many Jews Suddenly Wanting to Make Aliyah? 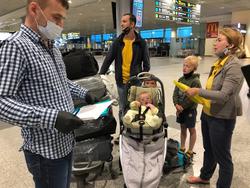 Rather than bringing Aliyah to a halt, the Corona crisis appears to be producing a surge in interest among Jews worldwide to move to Israel, and the question is why?

Israeli and Jewish Agency officials are estimating that as many as 90,000 Jews will immigrate to Israel over the next 18 months. That would be nearly double the average annual rate of Jewish return to Israel over the past decade.

In the United States alone, the number of applications by Jews seeking to immigrate to Israel in May 2020 was three times higher than in the same month last year.

There are several factors driving the Aliyah wave at present, but one of the primary reasons is the clear sense that Israel has done well so far in handling the Corona pandemic.

Looking only at the world’s Jewish population, the difference between Israel and the Diaspora communities on the Corona response is quite stark. Israel is home to some 6.6 million Jews and yet it has seen only around 300 deaths so far due to the Coronavirus, whereas an estimated 10,000 Jews have died from the virus to date in Europe and North America, where the Jewish population is just over 7 million.

Thus, Israel is increasingly viewed as being safer due its better health system than many other Western countries with significant Jewish communities. This is especially true when it comes to elderly residents of traditionally Jewish retirement homes and communities, which were hit especially hard by the Corona outbreak in the New York area.

Israel’s economy also is seen as stronger and more able to recover from the impact of the pandemic. Many Israeli workers placed on temporary layoffs in March and April are back at work, although unemployment remains abnormally high and incoming tourism is still blocked.

Israel also has shown its unique national resiliency over recent months. This is a people who have become accustomed, unfortunately, to facing a myriad of crises over the decades – including wars and natural disasters – and thus they know how to collectively pull together and respond.

Despite almost 18 months of political deadlock and three failed elections, Prime Minister Benjamin Netanyahu also took firm command of the nation’s battle against the “unseen enemy” of COVID-19 and even counselled other national leaders on how to deal with the global health menace. Polls instantly gave him a decisive boost for truly taking the reins in confronting the viral threat.

Finally, there are growing concerns among Jews worldwide about the sharp rise in antisemitism over recent months, as many are falsely blaming the Jewish people for the Corona pandemic as well as for the racial tensions rocking the US and many other nations right now.

This may be a bigger factor in the Aliyah surge than many realize. YNET published an article this week about the current Corona-related wave of anti-Semitism, calling it “an unprecedented phenomenon.” The article lamented the litany of rancid claims of late, such as charges that Jews poison wells, spread the virus with deliberate coughing, use it to kill Palestinians, and intend to take over the world through the pandemic.

The article cited a special study on anti-Semitism just released by a Tel Aviv University research center which revealed that there have been hundreds of recent instances worldwide of classic antisemitic charges and actions attributing the Coronavirus to Jews and Israel. The TAU report found that “Corona antisemitism” is not just showing up in the Middle East, but much of it comes from the United States, Latin America and Europe – where almost 20% of those recently surveyed in England blamed the spread of COVID-19 on Jews.

The recent Black Lives Matter protests in the US have added another poisonous ingredient to the antisemitic brew. In one shameful example, several white Hollywood elites bent over backwards in recent days to prove they are not racist towards blacks, yet in the process they deeply offended Jews. Chelsea Handler, Jessica Chastain and other A-listers re-tweeted or liked an old video clip of Nation of Islam leader Louis Farrakhan decrying racial prejudice, which meant they were ignoring his long record of blatant antisemitic outbursts. Farrakhan has called Jews “satanic,” compared them to “termites,” accused them of controlling the government and Hollywood, and also called Adolf Hitler a “great man.”

And now, a leading Labour politician in the UK has just erroneously claimed that George Floyd died at the hands of a white police officer in Minneapolis because Israeli security services have trained American police forces in the technique of using knee pressure to break the necks of detainees.

No wonder Jews around the world are starting to get very uncomfortable with their surroundings. Thus, the dramatic increase in the number of Jews applying to make Aliyah in just about every Jewish community abroad – from St. Petersburg to Sydney to São Paulo. This is another decisive moment in the modern saga of the Jewish return to Eretz Israel, and Christians must be at the ready to help bring them home.