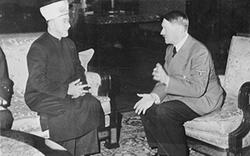 One of the first lessons we learn in the history of anti-Semitism is that hatred makes strange bedfellows. The oddest of partnerships have been formed around a common enemy.

An example of this friendship between enemies is that of the Nazi regime, which believed in Aryan supremacy, and the Muslim world, which seeks to assert Muslim supremacy. The two worlds would have collided over much of their respective ideologies but found a common bond that overshadowed all points of disagreement.

That unifying bond was their hatred for the Jew. The same paranoid worldview and irrational anti-Semitism that drove the Nazis then drives Islamist terrorism today. While it is true that Islamist ideology has theological foundations found in the Koran, the modern militant and delusional obsession with anti-Semitism was birthed during the Nazi period.

The conduit for this ideology was Haj Amin El-Husseini, the Grand Mufti of Jerusalem, and the movement that he helped to lead—the Muslim Brotherhood. Haj Amin El-Husseini’s anti-Semitism pre-dated Nazism, but from 1941 onward, he lived in Berlin, overseeing a staff of 60 Arabs who worked night and day promoting Nazism in the Arabic-speaking world. The German leaders were enamored with the Mufti and provided a steady stream of funds and arms to his followers in Palestine. Scholars debate whether he had the idea first or not, but the Mufti clearly backed the plan to exterminate Europe’s Jews to keep them from fleeing to their ancient homeland.

After the fall of the Nazi regime, El-Husseini found asylum in Egypt where he served in the leadership of the Muslim Brotherhood. Through that organization, he converted Nazi ideology into a militant, Islamic one and took the call for Jihad and martyrdom throughout the Muslim world.

The Muslim Brotherhood was founded in 1928 in Egypt, and by the end of the Nazi regime in 1945, they already had 500,000 sympathizers. Their manifesto is “Allah is our goal, the prophet our model, the Koran our constitution, the Jihad our path, and death for the sake of Allah the loftiest of our wishes.”

They are credited with birthing the jihadist culture of death and the various groups committed to it, including Hamas, Khomeini’s revolution in Iran, and Al-Qaeda. This history explains the Hitler-like rhetoric of Muslim leaders today, for example in Iran, and their espousal of the same delusional and paranoid worldview, dehumanizing of Jews, and calls for their annihilation.

The lesson for us today is hatred makes strange bedfellows indeed! In our own country, we see the illogical alignment of the Progressive, secular left with the religious, Islamic movement led by the Muslim Brotherhood—a union that would be absolutely impossible were it not for their shared hatred of Israel. It is the classic example of the saying, “The enemy of my enemy is my friend.”

We see this alliance in many ways, such as anti-Israel ideologues who blame Israel for security measures but refuse to address the abuse of the Palestinian people by their own corrupt and failed Arab leadership. In the same way, the women’s movement condemns Israel—where women make up 25% of parliament and serve in the military—and ignore the oppression and outright abuse of women in the Muslim world. Secular Human Rights activists do not speak out on behalf of Christians around the world suffering persecution and martyrdom for their faith, because most of this takes place in Muslim countries.

This alliance will also never speak out against the rising anti-Semitism in America, so we must. Christians in America are THE voice against anti-Semitism in the United States, and with your help, we intend to make it loud and clear