Did The Jews Steal The Palestinians’ Land? 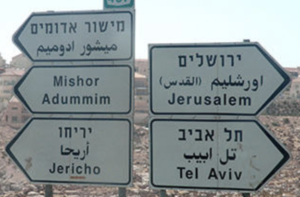 A common accusation against Israel is that the state is founded upon land stolen from the Palestinian people. A quick review of history reveals a far different story.

The Jewish people’s connection to the land goes back some 4,000 years when, according to the Bible, God bequeathed it to the Jewish people through an unconditional covenant with Abraham. The Bible also records the Israelites’ settlement of the land and the establishment of the Davidic Kingdom there. Over the next 3,000 years the Jewish people suffered two exiles; however, a Jewish presence always remained.

The second exile began when Roman forces destroyed Jerusalem in AD 70, slaughtered many Jewish inhabitants, took others into captivity to Rome, and caused many others to flee. In AD 135, Emperor Hadrian attempted to remove all traces of Jewish identity from the area by building a pagan city he named Aelia Capitolina over Jerusalem and erecting a temple to Jupiter on the Temple Mount. He also renamed the area of Judea “Palestine” after the Philistines, the ancient enemies of the Israelites.

Paganism eventually gave way to Christianity in Rome, and the Christian Byzantine Empire ruled over the region of Palestine for some 300 years until the Islamic invasion of the seventh century. After that, Islam ruled the land of Israel for some 1,400 years until the defeat and breakup of the crumbling Ottoman Empire in World War I.

International Backing of the Modern Return

In 1920, the Allied countries of Britain, France, Italy, and Japan met in San Remo, Italy to decide what to do with the areas in the Middle East vacated by the Ottoman Turks. At this conference, they resolved to establish mandatory trusts over these areas for their respective indigenous inhabitants. These mandates were viewed as “sacred trusts” intended to prepare the areas for self-rule by the indigenous peoples. The 1917 Balfour Declaration had already declared Great Britain’s support for the establishment of Jewish sovereignty in Palestine, in recognition of the ancient Jewish claim and connection to the land of Israel. Former British diplomat Lord Curzon called the Balfour Declaration Israel’s “Magna Carta.”

On July 24, 1922, the fifty-one members of the League of Nations, which was later succeeded by the United Nations, unanimously adopted the British Mandate for Palestine. This decision was based on international recognition that the Jewish people were indigenous to the land of Israel. It thus enshrined into international law the legal right for Jewish people to settle anywhere in western Palestine, between the Jordan River and the Mediterranean Sea.

Several waves of Jewish immigration in the late nineteenth and early twentieth centuries resulted in economic development and job opportunities for the local population. Therefore, as the Jewish communities grew, so did the Arab population. Jewish organizations and individuals bought property from private landowners—many absentee—often paying exorbitant prices for barren desert and malaria-infested swamps. Upon statehood, Israel assumed title over any public lands once held by the Ottoman Empire.

After the UN Partition Plan of 1947, the Jews declared statehood, were recognized by the United Nations, and were admitted as full voting members to the international body. Israel’s founding was legal and accepted by the international community as such. However, the new Jewish State was immediately attacked by the surrounding Arab nations.

During the 1948 War of Independence, many Arab peoples living in areas now under Israeli sovereignty were displaced. Their displacement occurred for several reasons, including Arab leaders urging them to flee and promising their return after victory in a few short weeks. Most Arab refugees never left “Palestine” itself since they traveled a few miles to the other side of the fighting, while others crossed over into bordering Arab nations with the same language and ethnicity. Unfortunately, these Arab nations did not welcome their brethren, choosing instead to put them into refugee camps where many remain to this day.

Israel’s Proclamation of Independence, issued May 14, 1948, invited the Arab inhabitants of the land to remain in their homes and become equal citizens in the new state. The 160,000 Arabs who remained in Israel kept their homes and properties and are today Israeli citizens who enjoy the freedoms and opportunities afforded them by the region’s one and only democratic country. There are some 1.7 million Arab citizens of Israel today.

Meanwhile, in the wake of their defeat in 1948, the Arab states forcibly expelled more than 800,000 Jewish citizens and stripped them of all their property—constituting a much larger theft of land and belongings and a larger refugee problem than that claimed by the Palestinians. While Israel absorbed these Jewish refugees, the Arab countries did not absorb the Palestinian Arab refugees.

Hence, it is true that some Arabs lost their residences by vacating them in 1948 only to realize they were unable to return once the fighting stopped. It is also true that some Arab individuals have lost their homes due to Israeli military or security measures. And while any legitimate grievance should be recognized and compensated, the problem is small compared to the large amounts of land Israel obtained legally and the number of Jews who lost their properties in Arab countries. Therefore, it in no way calls into question the legitimacy of the Jewish State.

Susan Michael is the USA Director of the International Christian Embassy Jerusalem and creator of the IsraelAnswers.com website.