Keeping our lives free from the influences of the godless world 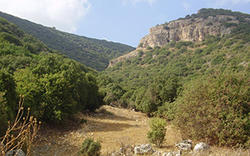 Mount Carmel is at the tip of a beautiful 24-mile-long wooded mountain range nestled in-between the Mediterranean Sea to the West and the Jezreel Valley to the East. “Carmel” means “vineyard of God” or “garden of God” and the Bible describes it as a beautiful and fruitful region.

Most Bible students, however, associate the area with the famous confrontation between the prophet Elijah and the prophets of the Canaanite fertility god, Ba’al, found in 1 Kings 18. While there are no archeological remains to verify the exact place of this event, the Stella Maris Monastery is said to mark the place of Elijah’s altar that had been known as the “place of burning” for centuries.

From the top of the monastery is a magnificent view overlooking the Jezreel Valley where many major wars have taken place throughout history and where at least one more is predicted: the war of Armageddon. It was on high places, such as Mount Carmel, that pagan altars were built; what a more fitting site for Ba’al worship than the lush “garden of God.”

Elijah chose this place of Ba’al worship for the site of a showdown with the pagan prophets and the king who supported them. First Kings 16:29–33 tells us that King Ahab did more to provoke the Lord to anger than all the kings before him because of his worship of Ba’al, and because of his marriage to the evil Queen Jezebel who had ordered the murder of the prophets of the God of Israel.

The Powerlessness of Ba’al

Ba’al was known as the fertility god of both the people and the land, and was often depicted as a bull with a lightning strike in his hand. This god of weather was believed to provide the rain needed for crops. Therefore, when a drought set in after Elijah had declared to King Ahab there would be no rain for three years, Ba’al was proved powerless.

After three years of drought, the agrarian economy was devastated, and the people were desperate. Elijah had King Ahab gather everyone on Mount Carmel—the prophets of Ba’al as well as all the people of Israel. Elijah then implored his fellow Israelites to decide to either follow the God of Israel or follow Ba’al.

After the prophets of Ba’al were unable to call fire down from heaven, Elijah taunted them with his sarcastic remark about their god: “Either he is meditating, or he is busy, or he is on a journey, or perhaps he is sleeping and must be awakened” (1 Kings 18:27).

Elijah then built an altar in the name of the God of Israel, based on twelve stones to signify the twelve tribes of Israel. He drenched the altar with water and waited for the time of the evening sacrifice at which time fire came from heaven and not only consumed the burnt sacrifice, but the wood, the stones, and all the water.

The lesson we take away from our visit to Mount Carmel today is the importance of keeping our lives free from the influences of the godless world around us. Elijah entreated the people to choose between the true God and the false one, because the righteous and holy God of Israel required pure worship and lives dedicated solely to Him.

John echoed Elijah’s call to purity in his warning to the Laodicean church in Revelation 3. He accused the Laodiceans of being neither cold nor hot, but lukewarm (Revelation 3:16)—an impure condition that would result in their loss of relationship with God.

It is critical that we discern and turn from worldly influences infiltrating our lives, making our worship impure and our faith lukewarm, so that our conduct demonstrates, “The Lord, He is God” and we walk in the power of God as did Elijah.