Why is UNESCO Trying to Erase Jerusalem’s Jewish and Christian History?

Arab opposition to Israel within the UN 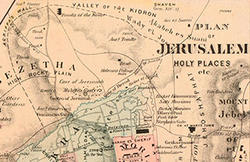 The integrity and balance of power among the United Nations 190 members has shifted since the establishment of the United Nations in 1945. Now, Arab nations and their allies outnumber Israel and its allies. Stark differences have intensified since Palestinians have made significant inroads into the UN decades after Arabs rejected the UN’s 1947 Partition Plan-UN Resolution 181- which designated a state for both Jews and Arabs. Before and since then, Arab opposition to Israel rests in their unyielding position that all of Israel belongs to the Arab peoples.

A recent example clearly demonstrates the Arab bloc’s anti-Israel stance in the UN. The United Nations Educational, Science, and Cultural Committee (UNESCO) ‘s 56-member World Heritage Executive Board voted on two resolutions in 2016 which produced an outcry from Jews and Christians alike. Seven Arab nations presented “Occupied Palestine,” a resolution calling for the erasure of any Jewish presence in Jerusalem. It specifically named the Temple Mount and other related Jewish holy sites exclusively in Muslim nomenclature. The resolution passed 24-6 with 26 abstentions.

ICEJ USA wrote Ambassador Crystal Nix-Hines, United States representative, asking her to cast a vote against the resolution. The United States, one of only 6 other nations, voted against the “Occupied Palestine” resolution. Susan Michael, Director of ICEJ USA commented, “The fact remains that the Jewish history of Jerusalem is also Christian history.” Israeli Prime Minister Benjamin Netanyahu called the decision a “theater of the absurd.”

UNESCO, created in 1945, is known as the “intellectual” agency at the UN. In the Executive Board’s attempts to rewrite Israel’s ancient history, it has lost its intellectual and moral compass. In her attempt to restore its purpose, Irina Bokova, UNESCO’s Director General stated, “Nowhere more than in Jerusalem do Jewish, Christian and Muslim heritage and traditions share space…These cultural and spiritual traditions build on texts and references, known by all, that are an intrinsic part of the identities and history of peoples.”

Ms. Bokova also reassured Israeli leaders, “Allow me to reassure you of my absolute commitment to continue all efforts in countering all forms of anti-Semitism, including those drawing on partial or distorted visions of culture and history, as well as those that seek to challenge the existence of Israel.” She has received death threats for her stance.