What is Life Like for Minority Groups in Israel? 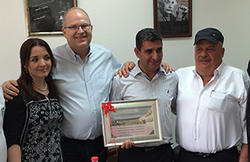 With more than 8 million citizens, Israel is a vibrant tapestry of diversity and multi-cultural co-existence. Some 20% of Israeli citizens are non-Jewish but live in Israel with full citizenship rights. Israel’s Declaration of Independence, implemented in 1948 when the modern Jewish state was officially recognized at the United Nations, ensures complete equality of social and political rights to all its inhabitants irrespective of religion, race, or sex and goes on to codify freedom of religion, conscience, language, education, and culture. In addition, Israel has many laws which prohibit discrimination.

Hebrew and Arabic are Israel’s official languages as seen in schools, universities, and even road signs. In conversation as well as polling, the majority of Israeli Arabs consistently express their preference for living in Israel’s democracy rather than as a part of the Palestinian-governed territories, although Israeli Arabs and Palestinians have many family, friend, and business ties.

While the Israel Defense Forces do not require Arabs to serve in their military, they are welcomed and ably serve. One of Israel’s most highly decorated Generals is a Bedouin, one of six Arabs who has received the third highest military honor. Israeli Arab women, unlike Arab women in most other Middle East nations, work, vote, drive, run for national and local office, and attend universities for higher education. Israeli legislation guarantees equal rights, and prohibits polygamy and child marriage.

Like other democracies Israel continues to diligently work towards improving the lives of its minorities and serves as a demonstrable microcosm of successful co-existence in the close quarters of a country the size of New Jersey.