Celebrating The Feast Of Tabernacles 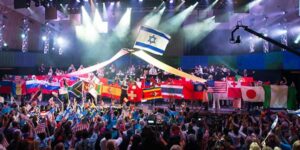 For 35 years some 5,000-8,000 Christians have travelled from over 100 nations to celebrate the Feast of Tabernacles in Jerusalem. The biblical holiday, which lasts for seven days, commemorates God’s supernatural provision for the Israelites during their wilderness wanderings and celebrates God’s provision. Why do Christians come to Jerusalem to celebrate this Jewish feast?

The feast of Passover was the most familiar one that commemorated the Jewish people’s freedom from the bondage of slavery in Egypt and the deliverance of their firstborn from death through the blood of the lamb painted on their doorposts. Since Jesus’ sacrificial death for the sins of the world occurred during Passover, this is a Jewish feast which has a Christian fulfillment and broad general awareness within Christian circles.

The second feast is that of Shavuot or Pentecost. Shavuot means “weeks” in Hebrew. It is seven weeks or 50 days after the first day of Passover and was translated to “Pentecost” in Greek. It was during this festival some 2,000 years ago that God poured out the Holy Spirit upon the believers gathered in prayer. Many churches celebrate Pentecost Sunday, however with minimal understanding of the Jewish feast of Shavuot that the early believers were celebrating when the Holy Spirit fell.

A feast with future fulfillment

The third great feast is the Feast of Tabernacles, which is known even less by churches because it does not have a corresponding Christian event as its fulfillment. The problem is that the Feast of Tabernacles is a forward looking feast with a future fulfillment. It is the only one of the three feasts that will be celebrated during the Messianic era, and by the gentiles as well, according to Zechariah 14.

The Watsons and their colleagues felt that it was time for Christians to understand this third great feast and what it meant. So in 1980 the first international Christian Celebration of the Feast of Tabernacles took place in Jerusalem and was attended by some 1,000 Christians from a number of countries. It was at this Feast that the International Christian Embassy Jerusalem (ICEJ)was launched.

For 35 years the ICEJ’s celebration has annually drawn some 5,000-8,000 Christians and they have come from over 100 nations. This celebration is now expected to grow even larger thanks to a new, larger arena in Jerusalem that can accommodate thousands more. While this annual celebration is not a fulfillment of Zechariah’s prophecy, it is clearly an indication that the days of Zechariah are approaching.Celebrating God’s provision

The word “Tabernacles” in Hebrew is Sukkoth, which means “booths” and refers to the temporary dwellings that the Jewish people lived in during the wilderness wanderings and are commanded to live in during this holiday. The biblical holiday lasts for seven days and has dual significance: commemorating God’s supernatural provision for the Israelites during their wilderness wanderings and celebrating the current year’s harvest—another sign of God’s provision. As a result, it is the one feast of the year when the Jewish people are commanded to rejoice! There is also rich symbolism in Feast traditions that indicate God’s beckoning of the nations.

Celebrating the Kingdom of God

It has been said that redemptive history has three segments. There is a Passover segment from Moses to Jesus. There is a Pentecost segment in which we are now living when the Spirit of God is being poured out and the harvest is being gathered from every nation of the world.

The final great segment of human history will be the Tabernacles segment. After the Messiah’s feet stand on the Mount of Olives, His visible kingdom will break in on the world. This will be the age of Tabernacles, and it will be an age of unparalleled joy over the largest harvest of souls the world has ever seen, their deliverance from the power of evil, and the arrival of the Kingdom of God on earth.

Christians now understand that the Feast of Tabernacles is an opportunity to celebrate the Kingdom which is in individual hearts now while looking forward to the joyous time spoken of in Revelation 21:3 when God will “tabernacle with men.”