Enemies of Israel attempt to convince us that Israel is an illegitimate, colonialist project in which foreigners moved in, took land, and forced a state upon the locals. The truth is that Israel’s founding has a firm basis in international law and was established through the same legal process behind the founding of every other country in the Middle East. To question Israel’s legality, one must question countries like Jordan, Syria, Kuwait, and Iraq, to name a few.

Continual Jewish Presence in the Land

A quick overview of history will reveal that Jews have maintained a continuous presence in the land of Israel for more than 3,000 years. Their connection to Jerusalem goes back almost as far. The city is mentioned close to 700 times in the Hebrew Bible and has been the Jewish people’s capital since the days of King David.

Under the Roman Empire, however, the city of Jerusalem and the Jewish temple were destroyed. Many Jews were killed, others fled, and more were forced out. This was the beginning of an exile that lasted 1,900 years, during which more than 100 generations of dispersed Jews prayed three times a day to return to Jerusalem. Even so, a small number of Jews had remained and maintained a presence in the holy city and other areas of the land. Israel’s founding, therefore, was by the descendants of an indigenous people joining those who had maintained a presence in their ancient homeland.

After its destruction in 70 AD, the Romans rebuilt Jerusalem as a pagan city, renaming it Aelia Capitalina. They also changed the name of Judea to Palestina. Their goal was to remove all Jewish connection to the city and the land. The Roman Empire eventually became Christian, and the region of Palestine became peppered with churches.

In the seventh century, however, Islamic forces took the area, and for the next 1,300 years, Palestine was in the very center of one Islamic empire after another, ruling from India in the east to Spain in the west. The last Islamic empire was the Ottoman Empire, which lasted from 1517 to 1917.

Palestine was a small, insignificant region that these empires ignored and neglected. When the famous travel writer, Mark Twain, visited the Holy Land in the nineteenth century, he wrote, “Palestine sits in sackcloth and ashes . . . it is a barren, desolate, land.” Other writings of that era confirm this desolate situation—Palestine was not just barren and undeveloped, but it lacked a population.

Breakup of the Ottoman Empire

In WWI the Ottomans sided with Germany and lost so their empire was divided between the British, French, and Italians. Borders were drawn and leaders put in place to govern the new nation-states. The borders, however, were drawn with no regard to the people on the ground, which has resulted in many a skirmish to this day.

The Hashemite Arabs of Arabia had helped the British defeat the Ottomans—as depicted in the movie Lawrence of Arabia—and when the war was over, the British owed them favors. They were given territories outside of Arabia as payback.

Hashemite Emir Feisal, the premier leader of the Arab world, also supported a Jewish homeland in Palestine. He acknowledged the Zionists would enhance the economy of the entire Middle East. In return for his backing, he asked for his own state in Syria. When the French reneged, he withdrew support—and even opposed—the Zionist endeavor.

In 1922 the British betrayed the Jewish people, and 78 percent of what the League of Nations had designated as “the national home of the Jewish people” was broken off and presented as a gift to Abdullah (Feisal’s brother) for an Arab state. The remaining 22 percent designated for a Jewish homeland was inhabited by both Jews and Arabs, and tensions were increasing between the two populations as Arabs opposed Jewish sovereignty.

The League of Nations morphed into the United Nations in 1946 and was soon given the responsibility of finding a solution to the problem of Palestine. In November 1947, they passed a resolution to partition the area, with one part designated for a Jewish state and the other for an Arab state. The Jews accepted this plan and declared statehood in May 1948. The Arabs rejected it and declared war.

In 1949 Israel was admitted into the United Nations with a majority vote, thereby placing a stamp of approval upon her founding and acceptance into the governing organization.

Every country existing today in the Middle East was founded after 1920 and according to this same legal process: Following the 1918 breakup of the Ottoman Empire the League of Nations sanctioned mandates to the British, French, and Italians, authorizing them to establish independent nation-states and those new states were then ratified and accepted as members of the United Nations.

Therefore, we can boldly support the existence of Israel because its founding was completely legal and formulated by the community of nations.

In spite of what you may have heard, Israel’s founding is legally sound and was done with the support of the UN and the major international authorities of the day. The same political process created every national boundary and identity in the region. So if you want to question Israel’s legality you must understand what this legal process was and how it created the entire Middle East as we know it today.

After hearing Corrie Ten Boom speak many years ago, Dr. Tricia Miller began a quest to understand how the Holocaust could have happened in the heart of Christian Europe. Her quest took her to seminary where she completed a Phd in Hebrew Bible and wrote her dissertation on anti-Judaism in Christian interpretations of the book of Esther. She directs a network of Jews and Christians working together in support of Israel and has spoken in as many synagogues as churches. She shares her life lessons in building an authentic and sincere friendship with the Jewish community and how it has enriched her own Christian faith.

Show Links:
“Jews and anti-Judaism in Esther and the Church” by Dr. Tricia Miller – https://www.amazon.com/dp/B084679FRD/ref=cm_sw_em_r_mt_dp_6VBSKZPG3HWRDQ11CKR1
Contact Tricia or request information at: outofzion@icejusa.org 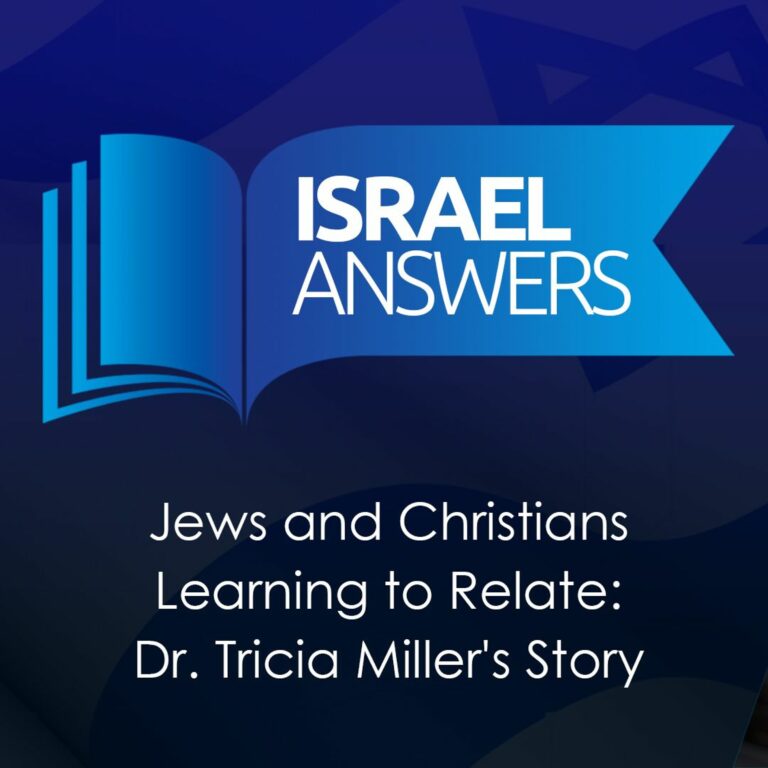