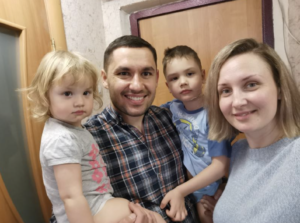 For many Jewish immigrants to Israel, moving to this land means the beginning of a new life in a very literal sense. It means changing to a new language, completely new and different schools for the children, and even new professions for some. Everything that provided stability in their past lives now requires re-calibration. This is not an easy challenge, but a fresh new start does present an opportunity to make dreams come true.

That is why the International Christian Embassy Jerusalem not only helps Jews around the world to make Aliyah to Israel, but also supports training programs for them which are so crucial for Jewish olim (newcomers) to thrive in their careers once here in the Promised Land!

Leonid Shalaev, along with his wife and two children, arrived in Israel on a ‘rescue flight’ sponsored by the ICEJ on March 15. For Leonid, his arrival was marked by a long-awaited reunion with his brother, who had already made Aliyah to Israel.

Leonid was born into a family who had lived for several generations in Kamchatka, in the Far East of Russia – a long 5600 miles distance from the Promised Land. Leonid’s grandfather, Valentin Vasilievich, worked in agriculture and was sent with his wife Svetlana to the remote Siberian city during Soviet times.

Leonid was a young man when he moved to Volgograd, in southwest Russia, to study at the Polytechnic University. After successfully completing his degree, he got a job with a Chinese company, which allowed him to travel to many cities across Russia.

Leonid led an active lifestyle. “Once, I decided to spend my vacation rafting down the Tuyun River from Yakutia to Khabarovsk,” he recalled. “During this tour, I met and fell in love with Irina, who became my wife.”

The young couple decided to move back east to Vladivostok, a port city located on the Sea of Japan. Their love blossomed and they welcomed the birth of their son, Savely, and daughter, Polina.

Yet despite now having a family, Leonid was not ready to settle down in the Far East.

“We had a dream to live in a warm climate. I also always dreamed of becoming a computer programmer. And I really missed my brother, who made Aliyah and now lived in Israel”, Leonid shared. “Israel makes all dreams come true!”

From that moment on, Leonid began to take active steps towards his dream of reaching Israel. He found out that one of his friends studied in the Tel Ran educational programs for new Jewish immigrants and was able to find a good job in Israel. “I thought I could do that too,” said Leonid.

Since October 2019, Leonid and his wife began to study Hebrew in Ulpan classes offered by the Jewish Agency. At the same time, he started preparing for the Tel Ran entrance exam and was accepted to the program last August. 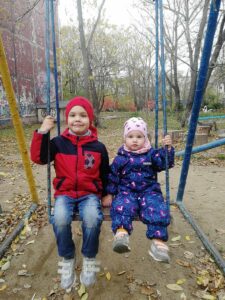 Everything seemed to be going smoothly when they flew to Moscow in November 2020 for an appointment with the Israeli consul and received their entry visas to Israel. “We were hoping to come immediately after and had made all the preparations,” said Leonid.

But then Israel closed its borders tighter due to coronavirus mutations and Ben-Gurion Airport was completely shut down for the first time in its history. The Shalaev family’s hopes sank, just like dozens of other Jewish families waiting at that time for their flight to citizenship in Israel.

“This was such a disappointment, and we didn’t know what to do,” recounted Leonid. “We had already quit our jobs and sold our apartment.”

“And then, we got the best news ever that we would fly with the whole family to our dream! To our new home – Israel!”

This door suddenly opened thanks to the ICEJ, who sponsored the ‘rescue flight’ arranged by the Jewish Agency for a group of 226 Jewish immigrants from across the former Soviet Union, including the Shalaev family.

“Thanks to all those who helped make this flight happen! Many thanks to you all,” said Leonid.

We wish Leonid success in achieving his other dream of becoming a programmer. One of the training courses that the ICEJ supports will help him to reach this goal as well.

All this would not have been possible without the generous donations of our Christian supporters around the world. We now are expecting to welcome our next ‘rescue flight’ from Central Asia with about 100 new Jewish immigrants in April. So please consider sending your best gift to support these life-changing Aliyah efforts.