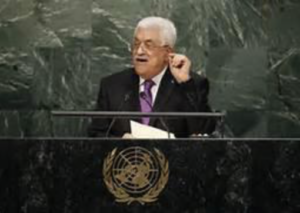 Mahmoud Abbas became the first prime minister of the Palestinian Authority in 2003 and was elected as its president in 2005 after former leader Yasser Arafat’s death. Abbas belonged to Yasser Arafat’s inner circle for 40 years and still imitates some of his mentor’s policies. Egyptian-born Arafat was a product of the Muslim Brotherhood and is often cited as the godfather of modern terrorism.

In 1982, during Soviet Union communism, Abbas earned his doctorate from Patrice Lumumba University in Moscow (now known as the Peoples’ Friendship University of Russia). His thesis, “The Connection between the Nazis and the Leaders of the Zionist Movement,” was published in Arabic as a book entitled The Other Side: The Secret Relationship Between Nazism and Zionism. Abbas claimed that the 6 million who were killed in the Holocaust was a “fantastic lie” and “a myth,” and the “Jews which were killed by the Nazis were actually the victims of a Zionist-Nazi plot.” Critics of his book view it as Holocaust denial. A decade later, Abbas seemed to abandon some of these tenets after an outcry from the Jewish community.

Abbas was implicated in the financing and planning of the massacre of Israeli Olympic athletes in 1973. Then, in 1985 he was implicated in the hijacking of the Italian Achille Lauro cruise ship by Palestinian terrorists who threw a wheelchair-bound Jewish businessman overboard to his death. Along with the Palestinian terrorists, Italian courts convicted Abbas in absentia for his part in planning the hijacking, but he served no time.

In the ensuing years, Abbas accumulated a mixed record. Western nations generally consider him more of a pragmatist. For example, under international pressure he said he was not in favor of the Palestinian’s violent uprising (Intifada) in 2003. Although he participated in a round of direct peace talks in 2008 with Israel’s then Prime Minister Ehud Olmert, Abbas walked away—even though he was offered 95 percent of his requests.

In negotiations with PM Netanyahu in 2010, Abbas refused to continue discussions citing the “building of settlements” as a hindrance. He called on PM Netanyahu to halt construction for 10 months, promising to restart talks. Netanyahu complied, but direct negotiations have not taken place since.

Instead, Abbas has focused on winning favor in the United Nations. He justifies this move in part because he claims that US-mediated peace negotiations did not put enough pressure on Israel to make concessions. To make matters worse, not only has Abbas refused direct negotiations with PM Netanyahu, but in 2014 he aligned with Hamas, the terrorist government of Gaza.

He and his sons have been accused of corruption with his net worth now estimated to be $100 million. In July 2012, the US Congress called the corruption into question naming it “Chronic Kleptocracy: Corruption Within the Palestinian Political Establishment.”

A true partner for peace? You decide.

Susan M. Michael is US Director of the International Christian Embassy Jerusalem www.icejusa.org and creator of www.israelanswers.com educational website.