Before the Rooster Crows

Why the church of St. Peter Gallicantu is a “must” for Christian tour groups 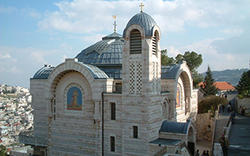 One of my most memorable experiences in Israel happened many years ago right outside the Old City of Jerusalem. I was living at a school on Mount Zion at the time, pursuing a master’s degree in Judeo-Christian Studies. As students often do, we came up with a bright idea that provided adventure while burning off pent-up energy from days spent in class. Our idea was to hike to the top of the Mount of Olives to watch the sunrise.

Early one morning, while it was still dark outside, a group of about six of us began the hike around Mount Zion, alongside the southern walls of the Old City, down into the Kidron Valley, and then up the Mount of Olives, passing the Garden of Gethsemane along the way. We had only just begun our trek around Mount Zion when we unexpectedly heard a rooster crow.

In the still of the night, the sound of that rooster reverberated off the stone walls and hills of Jerusalem and could be heard throughout the area. I was immediately transported back some 2,000 years. It was in this same vicinity of Jerusalem that Peter had denied knowing Jesus three times before hearing a rooster crow for the second time, just as Jesus had said would happen. I could just imagine how loud it had sounded to Peter, jolting him into the realization of what he had done and how Jesus had predicted that very moment.

A rooster crowing in the middle of Jerusalem was not something I would have expected to hear. “But then again,” I thought to myself, “it is the Middle East.” What I did not know then, but I came to learn some years later, is that we were walking right beside the church that commemorates this story in Scripture—and this church keeps a rooster on the premises. We probably woke the poor bird up!

The Beginning of Jesus’ Sufferings

The church is called St. Peter Gallicantu and is thought to be built over the remains of the High Priest Caiaphas’ palace. Peter’s triple rejection of Jesus “before the rooster crows twice” took place in the courtyard outside of the High Priest’s house (Mark 14:30).

The remains of a first-century aristocratic home can be seen beneath the church, and below the home is a dungeon, chiseled out of the Jerusalem bedrock, that was used to hold prisoners. From the dungeon guards could look down into a deep, dark pit that was used to hold someone in solitary confinement.

This dungeon is always a very moving experience for Christian visitors. Whereas prisoners would have been lowered by rope into the dark pit below, tourists today can walk down a set of stairs and gather inside to pray and read Psalm 88. What a moving place to meditate on the loneliness and rejection Jesus would have felt in the pitch-black darkness of a cold stone pit.

Whether this is truly Caiaphas’ house and where Jesus was held overnight is not known. But his house would have been in this general proximity and would have included a place for holding prisoners—just like this one.

If this house is not that of Caiaphas, then Jesus walked right beside it, because next to the church is a set of first-century stone stairs climbing Mount Zion from the Kidron Valley. We can be certain that Jesus climbed those stairs, bound and guarded by soldiers, as He was taken from the Garden of Gethsemane to be questioned by the Sanhedrin in Caiaphas’ house.

This was the beginning of Jesus’ imprisonment and sufferings leading up to His crucifixion. While Peter stood outside in the courtyard and denied knowing Him, Jesus may have been crying out to God from inside a dark pit:

You have laid me in the lowest pit, in darkness, in the depths …
You have put away my acquaintances far from me;
You have made me an abomination to them;
I am shut up, and I cannot get out. (Psalm 88:6, 8)

St. Peter Gallicantu is a “must” for any Christian tour group. It allows a small glimpse into the loneliness and abandonment Jesus felt on His final night when He was “despised and rejected by men,” while He bore “our griefs,” and carried “our sorrows” (Isaiah 53:3–4).