How Does Israel Treat Palestinians? 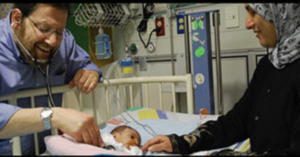 Ride around Israel with an Arab taxi driver, and he will readily tell you he prefers to live under an Israeli government. Various polls indicate that 60 to 78 percent of Arabs in East Jerusalem share the same opinion. How can it be that most Arab residents of Jerusalem would choose to live under Israeli governance rather than Palestinian?

A few facts will supply insights. At the time of the 1967 Six-Day War waged by five Arab nations against Israel, Arab residents of the West Bank—biblical Judea and Samaria—lived a third-world life. Although Jordan had occupied the area for 20 years, low life expectancy, malnutrition, poor education, infectious diseases, and child mortality were widespread. Fewer than 60 percent of all male adults were employed.

During the 1970s, under Israeli administration, the West Bank and Gaza then grew into the fourth fastest-growing economy in the world. By 1986, 92.8 percent of the population had electricity around the clock compared to 20.5 percent in 1967; 85 percent had running water compared to 16 percent in 1967. Not one university had existed in the territories, but by the early 1990s, seven such institutions were in operation boasting 16,500 students.

Under Israeli governance the adult illiteracy rate had plummeted to 14 percent. More than 100,000 Palestinians worked in Israel, and many more worked in the 2,000 industrial plants that Israel built in the West Bank. Mortality rates fell significantly and life expectancy rose from 48 to 72 years by 2000. Childhood diseases like polio, whooping cough, tetanus, and measles were eradicated.

The PA’s corruption, embedded in Palestinian society, is one reason the Palestinian population prefers living in Israel. An egregious example of government corruption hurting the Palestinian people is found in the PA’s health care program where medical services are often supplied to the one who pays the largest bribe.

Even in recent years when 95 percent of Palestinians have been ruled by their own government, Israel has built a new regional business center in the West Bank which serves Israeli and PA personnel. In 2015, 190,000 Palestinians entered Israel for medical treatment, and trucks filled with humanitarian aid and goods for Gaza increased by 108 percent. A designated medical unit in the Israel Defense Force offers on-site medical care to Palestinians in cooperation with Palestinian hospitals.

Although various outbreaks of violence have marred the relationship between Jews and Arabs since the 1920s, the Second Intifada from 2000–2005 marked a dreadful turning point. More than a thousand Israelis died at the hands of suicide bombers detonating themselves on buses and in restaurants. The Israeli government finally implemented a passive solution by building security fences to hinder or slow down terrorists. This resulted in a 95 percent reduction of Jewish deaths, but necessitated checkpoints manned by the IDF.

The checkpoints remain a burden on both the Palestinians and the Israelis. The Palestinians feel trapped and inconvenienced. The Israelis don’t know who is going to wield a knife or a gun, or wear a bomb belt, to kill more Jewish people if allowed through the checkpoint.

One benefit of Israel’s security apparatus, including the wall and checkpoints, is that it has kept the PA government in power. The PA’s number one existential threat is the Hamas terror organization that would like to take over the West Bank just as it did Gaza. While growing disenchantment with the PA government may eventually give way to a Hamas takeover from within, Israeli security has been doing all it can to prevent a hostile takeover from without.

Despite these complex political problems, Israel has done much to better the lives of the Palestinian people over the last 50 years. They should demand as much from their own leaders.