Inside American Christian Support for Israel 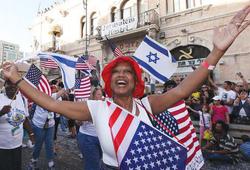 Christian support for Israel is an oft-reported and sometimes hotly debated phenomenon. Yet, in spite of all of the attention, it is a largely misunderstood movement. This writer, an American Evangelical Christian who has mobilized support for Israel for some 38 years, seeks to further the understanding of this movement, its struggles, and its vast potential.

Can It Be Trusted?

Almost every article written for a Jewish or Israeli audience about Christian support for Israel includes a disclaimer without which no serious journalist will submit their article. No matter how large a donation, how significant a show of support, or how great a deed by Christian Zionists is being reported, the disclaimer is always the same: “Christians support Israel because of their belief that the return of the Jews to their homeland will bring back Jesus.”

If you ask a Christian specifically for the biblical reason for support of Israel, a vast majority will respond that God promised Abraham He would bless those who bless him and curse those who curse him. They want to be on the right side of that equation! They believe that God has gathered the Jewish people back to their ancient homeland, just as the prophets foretold, and they need to support it. It really is that simple.

A spate of articles is now circulating that bemoan the diminishing support for Israel in American churches. While there are challenging trends in this regard, the truth is that American Christian support for Israel is still very strong. The 2015 Lifeway poll of pastors found that an astounding 8 out of 10 Evangelical pastors say Christians should support Israel.

That is much higher than even the general American public, which is also highly supportive. The Gallop Poll’s 2016 survey of American sympathies in the Middle East conflict revealed that American support for Israel has increased over the last 15 years and 62 percent of the general public now say their sympathies lie more with Israel.

The Gallop poll also revealed that even those aged 18-29 said they are more sympathetic to Israel than the Palestinians by a margin of more than two to one. The 2014 Pew Forum study revealed that the percentage of Millennials supporting Israel has stayed consistent over the last decade, but the percentage of those supporting the Palestinians has increased dramatically. So, there is cause for concern.

Other troubling signs are actually reflective of larger trends in American society and need to be seen in this context. First of all, American society in general is increasingly secular, and the percentage of all adults with religious affiliation, while still very high, is declining. Therefore, every major Christian denomination is showing a slight drop in membership. Only Evangelical churches reported growth, which means Christianity in America is becoming more Evangelical. But, since their growth rate was slower than that of the general population, America has become one percent less Evangelical.

The Millennial generation (roughly 18 – 35 year olds) is also increasingly unaffiliated religiously and is prone to support a secular ideology of social justice rather than a biblical ideology of support for Israel. Of those who were raised in church, half are drifting away from the church during college, which is causing alarm. However, other studies are showing that over half of those are returning to the church when they get married and have children, which is a trend that has been going on since polling began.

The fact that society is increasingly secular is only part of the problem facing the churches. The anti-Christian bias in media and education is a growing concern. I was recently speaking to a conference of Christian students who are attending Ivy League schools. Very few of them were aware of the existence of the BDS movement or anti-Semitism on their campuses. But many of them admitted they were often tempted to deny being a Christian because of the ridicule they would face.

Earlier this year, when 1,000 Evangelical leaders met with presidential candidate Donald Trump to hear his views, their number one issue of concern was the loss of religious freedom. Proof of this is found in the ongoing array of court cases attempting to defend the religious rights of Christians in America. Trump himself admitted to the group “you have lost your voice.”

However, much research is being conducted to determine how to turn this around and better reach Millennials as they are the future of Evangelical Christianity in America. A number of Christian organizations are putting considerable effort into bringing thousands of Christian young adults to Israel where their Bibles can come alive, their faith can be ignited, and their understanding of Israel can be increased. These programs, combined with other new initiatives geared at bringing pastors to Israel, are confronting these challenges head on. Much more will need to be done to reverse these trends, but now that the problem is exposed, solutions can be found.

Evangelical Christianity has been around since the Bible was translated into the common languages and began to be mass produced through the printing press some 500 years ago. This new movement of Bible-based Christians had an appreciation for the Jewish roots of Christianity and the fact that the Bible foretold of a future return of the Jews to their homeland. Therefore, they supported that return, and not just due to its biblical basis, but because they felt it was an act of justice for a people who had suffered persecution for centuries.

Evangelical Christianity is now the fastest growing segment of the Christian world, and while it may be facing challenges in America, it is growing exponentially throughout Asia, Africa, and Latin America. The number of Evangelicals in the world (including the pentecostal movements) is said to be as high as 800 million and has been growing at about five times the rate of the general population.

For Israel, this means that the fastest growing religious group in the world is pro-Israel and will be around for a very long time!

– by Susan Michael, ICEJ US Director, creator of Israel Answers, and the American Christian Leaders for Israel (ACLI) network

Susan Michael is US Director of the International Christian Embassy Jerusalem. The US Branch of the ICEJ takes pastors and young adults on tour to Israel, and combats the BDS movement in the Christian world via www.israelanswers.com.