Where is the Best Place to be a Christian in the Middle East?

Like all minorities in Israel, Christians enjoy equal rights and freedoms 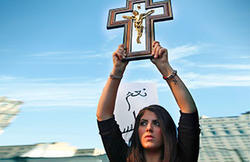 More than 100,000 Christians have been murdered each year for the past 10 years in the Middle East. That’s five Christians every five minutes. In Libya, 200 Egyptian Christians were lined up on a beach and beheaded by ISIS. In Saudi Arabia, the Christian Bible is banned throughout the entire country. In Iran, Pastor Saeed Abedini just spent his 35th birthday behind bars – imprisoned for the crime of preaching the Gospel of Christ.

So you might ask, is there anywhere in the Middle East where Christians are flourishing?

Greek Orthodox priest Father Gabriel Nadaf answered this question for the UN Human Rights Council last year. He said, “There is one country in the Middle East where Christianity is affectionately granted freedom of expression, freedom of worship, and security…it is Israel, the Jewish State.”

Like all minorities in Israel, Christians enjoy equal rights and freedoms.

Their right to worship is protected. Their freedom of speech is enshrined. Under Israeli control, Christian holy sites – like the Church of the Holy Sepulcher, the Church of St. John the Baptist, and Mary’s Tomb – have been protected and made free for all worshippers for the first time in hundreds of years.

In a region where ancient Christian communities have been decimated by persecution and violence, it’s no coincidence that Israel is the only place where Christian numbers are growing. The Jewish State is a beacon of human rights and tolerance – and a critical ally in the war against Islamic extremism. By supporting and safeguarding Israel, we support and safeguard Christians – a vulnerable minority in the Middle East.