Why Should America Support Israel? 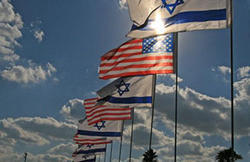 The American-Israeli relationship is one of the strongest friendships between any two nations on Earth. Built on a foundation of shared interests and values, the relationship benefits both nations immensely.

There are many different reasons why Americans should support Israel.

Israel shares our values. It is the only democracy in the Middle East – the only place in the region where the fundamental values championed by the United States – like individual freedom, human rights, and the protection of minorities – are exercised.

Israel shares our interests. Israel shares America’s interest to create a peaceful and democratic world. At the UN, the two nations have a virtually identical voting record. To put it simply, there is no country on the face of the earth more pro-American than Israel.

Israel is a critical ally in the war on terror. In the battle against Islamic extremism, Israel and America stand together on the front lines. According to Maj. Gen. George J. Keegan Jr., the former head of U.S. Air Force intelligence, the United States “owes more to the Israeli intelligence input than it does to any single source of intelligence.”

Israel makes America – and the world – a better place. Israel’s incredible contributions in fields from health to agriculture to technology save lives, create jobs, and enrich communities across the United States. With advances ranging from text messaging to cancer research, from drip irrigation to the flu vaccine, odds are that the innovative Israeli people have improved life for you and your family!