A Time to Refresh and Refuel in the City of Jerusalem! 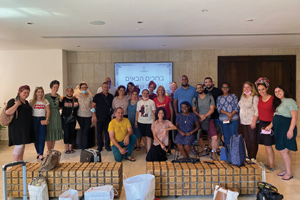 When ICEJ AID assistant Jannie Tolhoek entered a Jerusalem hotel lobby on a recent summer day, she was greeted by many smiling faces. These beautiful faces belonged to the dedicated and hard-working social workers from the Sderot region in southern Israel.

When the Christian Embassy learned about the intense burden these social workers were carrying during and after the Gaza rocket war in May this year, we immediately put plans into motion to ensure they could enjoy a brief respite to recharge in the always fascinating city of Jerusalem. The ICEJ treated the social workers to several nights in the stylish new Orient Hotel, which boasts a lovely rooftop veranda overlooking the Old City.

Yigal Levi, deputy director of social welfare in Sderot, explained that while they were under constant missile attack from Gaza, each one of these social workers left their own families day and night to go house-to-house checking on other families in their community. With under 30 seconds to seek shelter when the red-alert siren sounds, many families in this region spent most of their days and nights in a shelter while the terrifying sounds of explosions surrounded them.

“These social workers assisted a family where a child was killed while the traumatized family hunkered in their shelter. Their home took a hit from a rocket and shrapnel killed the child,” said Yigal.

Israeli social worker Naomi Zolberg has lived with her family in Sderot for 20 years and finds it very difficult to leave her three children at night to go out to help others. “They are also scared. It’s not easy,” says Naomi.

During the recent Gaza war, her family was separated when she sent her husband and three children to stay with relatives outside the Sderot area while she remained behind to focus on her work and care for other families. “The rockets were relentless, and in the middle of helping people, we have to go with them into the shelter and see them through this time of panic¬—people are screaming, while others just freeze from the trauma,” says Naomi. Her field of social work focuses on the whole family.

Mayan Givoni, also a social worker, currently cares for 45 at-risk teenagers participating in both formal therapy and non-formal groups. Playing musical instruments in therapy and counseling sessions is a tool often used to aid in the healing process for these teenagers.

“As social workers, we give so much, and we don’t take time for ourselves. We know people are depending on us, calling us, and we need to be there. This break is what we need to be filled up again so that we can continue to work,” said Mayan.

Jannie commended the social workers for the amazing work they do, saying: “Thank you for standing in the gap and helping the families to cope, as this is a huge burden that you carry on your shoulders. The ICEJ is so happy to bring you to the capital city of Jerusalem, to allow you to recharge and enjoy all the wonderful sights.”
“It was a very hard 11 days, but we will survive and not allow our enemies to win,” responded Yigal. “We thank you and your donors all over the world for giving our social workers the opportunity to come to a hotel to refresh.”

The excitement of being in Jerusalem and having some time out was hugely evident, and an applause of gratitude filled the hotel lobby! Among the many planned activities, the group thoroughly enjoyed a tasting tour of the Mahane Yehuda food market (the “shuk”) and a visit to a chocolate-making factory, while the evenings were fun-filled with singing and music.

Thank you for supporting the work of the ICEJ and helping us to bless those who show so much care and dedication to others, sacrificing their own needs and that of their families.