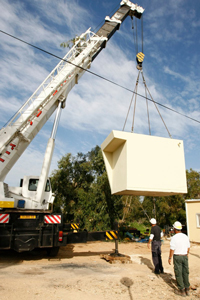 We have all watched with great concern over recent days as Israel has been pulled into another senseless rocket war with Hamas in Gaza. This is the fourth such major conflict in the past twelve years, and the toll is quickly rising on both sides.

As the Hamas rocket threat has increased over the years, the International Christian Embassy Jerusalem has responded by providing portable bomb shelters to vulnerable Israeli communities along the Gaza periphery. From Kerem Shalom in the south all the way up through Sderot and Ashkelon, there are now some 120 bomb shelters in place which were donated by the ICEJ to protect Israeli civilians in times like these. Local residents assure us that these shelters have indeed saved many lives, and given families living along the Gaza border the peace of mind they need to stay put.

One such assurance came while I was on a speaking engagement in Germany some years ago. I received a call from an unknown Israeli number, and upon answering a strong voice asked: “Am I speaking with Jürgen Bühler of the Christian Embassy?” I said yes, and he added: “You just saved my life, and I am calling to thank you!”

He introduced himself as Shai Hermesh, a Member of the Knesset. In amazement, I replied: “Sir, I am in Germany right now, and I don’t know how I could have possibly saved your life from here.”

He proceeded to tell me that he was living in a kibbutz along the Gaza border and the ‘red alert’ siren had just sounded, warning of another imminent rocket attack. “I ran into the nearest bomb shelter and just as I entered, a rocket exploded outside the shelter. It could have killed me! I saw a sign in the shelter informing me that it was placed there by the International Christian Embassy. So, you saved my life!” he explained.

Since then, we are in regular contact. I called my friend Shai Hermesh again just a few days ago to see if he is safe amid the current barrage of rockets.

This current crisis, with so far more than 1,500 Hamas rockets raining down on Israel, needs to remind us of the precarious situation throughout Israel, and in 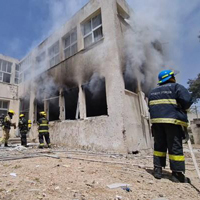 particular for the communities surrounding Gaza.

The events of recent days have shown that more shelters are desperately needed to protect innocent Israeli civilians being deliberately targeted by Palestinian terror militias in Gaza. Hundreds of thousands of Israelis are forced to seek shelter and may even need to spend their nights there. Many homes, community buildings and other public places do not have bomb shelters nearby, and area residents only have 10-20 seconds to find shelter when the red alert sounds of incoming rockets.

My family and I found ourselves in our own shelter this week. From the shelter we could hear the explosions of the four Hamas rockets falling close by our community just outside Jerusalem. So we know the frightful sounds of rocket explosions, and we also know these shelters literally save lives! The bomb shelters that the ICEJ places throughout Israel are crucial. So please help us provide more mobile bomb shelters to the Israeli towns and villages under the constant threat of rocket and mortar fire from Gaza.

We now have another twelve shelters currently in process to be made and delivered, but there are more urgent requests coming in for additional shelters where regional security chiefs tell us there are gaps in the civilian defenses. They are sorely needed at schools, daycare centers, medical clinics, youth centers, community halls and other public places that cannot operate without adequate bomb shelters.

The price of one of these high-quality shelters is between US$ 15,000-to-25,000, depending on the size. You have an opportunity to make a difference in this conflict by saving lives. Give your best gift today towards a bomb shelter to protect Israelis now under fire.