Why Is Israel’s Modern Statehood A Miracle? 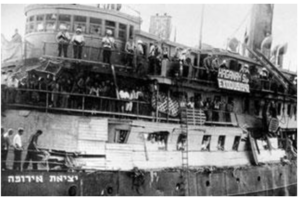 The story of modern Israel is amazing in itself, but when taken within the context of the history of the Jewish people, it is clearly miraculous. The only explanation for this epic tale is a biblical one.

Created to Bless the World

The uniqueness of the Jewish people is found in many aspects of their story but none more than in their beginnings. The story is found in Genesis 12:1–3 where God promises Abraham he would father a nation that would become a blessing to the world. The fact that Abraham’s wife Sarah was 99 and well past childbearing years makes the birth of their child, Isaac, a miracle—and proof that this nation is a fulfillment of God’s promise.

Given a Specific Land

Part of God’s promise to Abraham was the bequeathing of the land of Canaan as an “everlasting possession.” While Abraham himself only dwelt in the land as a foreigner, and died without seeing his descendants inherit the land, it surely came to pass hundreds of years later. After 400 years of slavery in Egypt, the children of Abraham, Isaac, and Jacob entered the land of Canaan and established sovereignty over it.

While many books in the Bible chronicle the story of the Jewish people and were written after the described events took place, the prophetic portions of Scripture foretold of many future events in the life of Israel and described in great detail how they would happen. These prophets foretold of two exiles and returns, and the centrality of the Jewish people in the establishment of God’s kingdom on earth. Israel’s story is a fulfillment of the promises and prophecies found in the Bible, and as such provides living proof of the absolute accuracy of the Scriptures.

Their Survival Against All Odds

The calling on the Jewish people was to bless the world with God’s redemptive plan—and they would suffer greatly for it. The powers of evil would forever fight against God’s plan and the best way to stop that would be to destroy the people called to bring it about. That this tiny people group survived two exiles, centuries of persecution, and multiple attempts at annihilation is a feat so beyond the norm that it is indeed a miracle—one promised by God (Jeremiah 31:36; Isaiah 66:23).

The story of the modern-day return of the Jewish people to their ancient homeland—the land of Canaan promised to Abraham 4,000 years ago—finds no parallel in human history. In the last 120 years or so, 3.5 million Jews have returned to their ancient homeland and reestablished national sovereignty there. This return from all the countries to which they had been dispersed was foretold in many verses, including Isaiah 43:5–6 and Jeremiah 16:14–15.

The Miracle of Israel

The day after the State of Israel was born five Arab countries with well-equipped armies attacked the fledgling nation. The newborn State had no unified defense force and many fighters were newly arrived Holocaust Survivors and refugees with no knowledge of Hebrew, equipped with few guns and inadequate supplies of ammunition. Their defeat of the vast Arab armies was nothing short of miraculous.

In the 70 years since, Israel has not known a day of peace and has had to focus its investments and energy on defense, yet is now leading the world in technology, innovation, medicine, agriculture, security, and disaster relief. The good heart of the Jewish people and their innate desire to Tikkun Olam (“repairing the world”) is increasingly making them a light to the nations.

The Future Glory of Israel

The Bible foretells of a day when it won’t be good deeds and accomplishments that will shine forth from Israel, but the actual glory of God. It will be so bright there will be no need for the sun nor the moon (Isaiah 60:3, 19), and the nations will come to worship the Lord there (Isaiah 66:18, 23). The birth of the modern State of Israel is a miracle, and there are even more to come.