Is It Safe To Visit Israel? Yes! 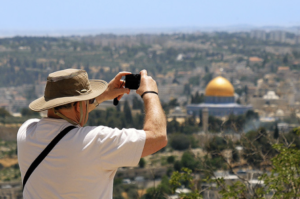 Tourists and business leaders alike flock to Israel. GLOBES, Israel’s financial daily, reports that pilgrimages, tours, vacations, and leisure bring the highest numbers of travelers, but due to Israel’s innovative climate, 11 percent of visitors come for business reasons. Apple, IBM, Intel, Google, and Microsoft deem Israel safe enough to invest multiple millions of dollars building R & D facilities in Israel. From India to Indonesia, the United States to the United Kingdom, from Nigeria to the Netherlands, and China to Chile, tourists flood tiny Israel—with a population of only 8.7 million. Tel Aviv, with its vibrant nightlife, and Jerusalem, with its holy sites, are just two examples of Israel’s cities, towns, and villages full of manifold things to do, see, and experience.

The 24/7 news cycle often reports Israel in a negative light. While visitors know that terrorism lurks on Israel’s borders, they refuse to abandon their exciting plans to visit Israel. Most tourists feel safe in Israel—safer than in parts of their own cities and countries. Tour companies and the Israeli government maintain ongoing dialog regarding the safety of visitors. To top it off, the welcome visitors receive from Israelis is unparalleled. All Israelis are hyper-vigilant when it comes to security, but their intense celebration of life is evident everywhere in their daily lives and festivals.

First-time and returning visitors confirm the popularity and safety of Israel. Tourism to Israel is at an all-time high for 2017, with numbers some 25–30 percent higher than in 2016. The Ministry of Tourism notes that in 2016, first-time visitors reached 58 percent with 42 percent returning. Other 2016 statistics indicate that 56 percent of tourists were Christians made up of 41 percent Catholic, 26 percent Protestant and 22 percent Russian Orthodox. The Ministry also notes that 2,000 celebrities, opinion leaders, and tourist agents visited in 2016.

Tiny Israel, Lots to Do

Since Jerusalem is Israel’s capital city containing the Western Wall, Judaism’s holiest site, 82 percent of all tourists visit the Holy City. The coastal city of Tel Aviv-Jaffa is next in line at 67 percent, with its modernity, outstanding restaurants, and beaches. Conde Nast magazine names Tel Aviv one of the world’s top travel destinations. The Dead Sea, Tiberias, and the Sea of Galilee are also popular. No matter what your interests, Israel likely has it: snorkeling, parasailing, snow skiing, archaeology, museums, hiking, concerts, churches, and synagogues.

Millions of first-time and returning visitors and 90+ airlines flying in and out of Tel Aviv say YES! It is safe to visit Israel!