What Does the Bible Have To Say About The Return Of The Jewish People To Their Homeland? 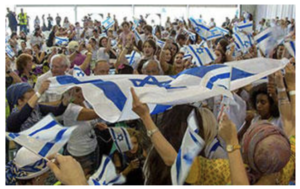 A special term from the Hebrew Bible is used to describe the process of returning to the Land—Aliyah, which means, to “ascend.” It was used in ancient times in reference to Jewish pilgrims ascending to Jerusalem for the three great biblical Feasts of Passover, Pentecost, and Tabernacles. Thus, the process of making Aliyah today is seen as having spiritual meaning beyond the physical act of return.

Let’s see what the Bible has to say about the modern-day return of the Jewish people to their ancient homeland—the Land of Israel.

There Are Two Returns

Isaiah 11:11 indicates there would be a day when God would raise his hand “a second time” to gather the children of Israel to their homeland. The first return was predicted by the prophet Jeremiah to take place after Israel had been in captivity for 70 years (Jeremiah 29:10), and according to Ezra 1:1 happened precisely as foretold. After 500 years of intermittent and partial sovereignty in the Land, the Jewish people were once again dispersed under the Roman Empire in AD 70. After 2,000 years, they have now returned and reestablished sovereignty. No other people group has managed to survive two exiles—much less one that was 2,000 years long—and then return to reestablish national sovereignty.

The Second Return is from All Nations

A Banner to the Nations

The regathering of the Jewish people to their land is depicted as God’s banner to the nations (Isaiah 11:12). A banner was often a rallying point in military operations, and was carried to lead a formation, but often bore the name or image of that army’s God. Using this symbolism, the Hebrew prophet Isaiah considered the ingathering as a proclamation of God’s name and His character to the nations (Ezekiel 28:25).

The Return is not Based on Merit

The Mosaic Covenant was clear that living in the Land of Israel was a benefit of walking in obedience with God, and that even after exile, repentance would lead to Israel’s return. However, the Hebrew prophets spoke of a day when God would sovereignly gather His children back to the Land, not because of anything they had done, but to be a witness to the gentiles and to vindicate His name. The timing was up to Him (Psalm 102:13); He would do it (Jeremiah 23:3), and He would even use the gentiles to make it happen (Isaiah 49:22–26; 60:8–12).

God vindicates His name because it has been profaned before the nations through the disobedience and exile of His people (Ezekiel 36:22). He will demonstrate His holiness (Ezekiel 36:22–23) and His faithfulness, whether His children are deserving or not. It reflects His love and mercy toward them (Isaiah 60:8–10), as well as toward the world He plans to redeem and fill with His truth and glory for eternity (Psalm 102:16–22).

This Great Act of God Leads to Revival

The ingathering of the Jewish people in modern times holds great promise for Israel and for the world, as it heralds the soon coming of the Messianic kingdom. While it is a physical return with many logistical and practical aspects, it is a sacred thing because it is building a platform for the coming of the kingdom of God, when the glory of the Lord appears (Psalm 102:15–16) and He tabernacles with man (Ezekiel 37:26–27: Revelation 21:3).

That the gentiles are called to assist in this process is an amazing and holy thing. Isaiah 66:20 describes the act of gentiles bringing His people home—the people He loves and will use to bless the whole earth—as so sacred it is likened to “bringing an offering to the Lord.” What a wonderful image depicting the biblical significance of the return of the Jews to their homeland.