How Can We Help Palestinian Refugees? 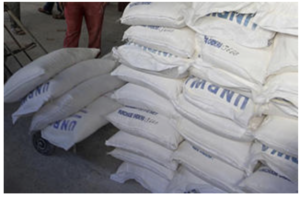 Seventy years ago, the United Nations voted to declare Israel a modern state. When Prime Minister Ben Gurion read Israel’s Proclamation of Independence on May 14, 1948, he urged the Arab population to remain “on the basis of full and equal citizenship and due representation in all bodies and institutions.” The Jewish population danced and sang on Israel’s streets. Their joy was short-lived.

The Cause of the Refugee Problem

Arab armies from Jordan, Egypt, Syria, and Lebanon attacked the nascent state the next day. Their leaders ordered Arabs to leave their villages and cities promising a quick victory and return to their homes. The roughly 160,000 Arabs who stayed have grown into 1.5 million Israeli-Arab citizens with full rights in a thriving country with Hebrew and Arabic as the official languages.

Most, however, left—roughly 720,000. A few years later, the Jordanian newspaper Ad Difaa quoted one who had fled to Jordan saying, “The Arab governments told us, ‘Get out so that we can get in.’ So, we got out, but they did not get in.”

The 1947 UN Partition Plan had provided for two states, one for Jews and one for Arabs. Had Arab leaders accepted the UN solution, those who fled in 1948 would now reside in their own state. There would be no Palestinian refugees. The Jews accepted the UN Plan, and even though more than 850,000 Jewish people had to flee Morocco, Algeria, Tunisia, Egypt, Libya, Iraq, Yemen, Turkey, Lebanon, and Syria in 1948, Israel absorbed all of the ones wishing to resettle in their ancestral homeland.

The UN Has Not Helped

The United Nations High Commissioner for Refugees (UNHCR) is the main agency working with the 22.5 million refugees worldwide. Its goal is resettlement in one of 37 countries with programs to do so.

However, a second and separate agency was created for Palestinians—the United Nations Relief and Works Agency for Palestine Refugees in the Near East (UNRWA). UNRWA’s goal is not to resettle Palestinian refugees but to “protect and assist” them. It has even expanded the definition of a refugee to include descendants. This means that in addition to the roughly 20,000–30,000 original refugees still alive today, UNRWA has added another 5.3 million Palestinians to its registry.

UNRWA itself has been a burgeoning bureaucracy of 30,000 staff members with an annual budget of $800 million. It is in UNRWA’s own interest to perpetuate the problem, because solving it through resettlement would mean the end of its existence.

UNRWA is Part of the Problem

UNRWA has fueled the Palestinian refugee problem for decades by treating the Palestinians differently than other refugees and holding out hopes that have not, and likely will not, materialize—to return to ancestral homes. No other refugee population in the world benefits from a specialized agency nor do descendants of refugees have hope of repatriation efforts.

Donor countries have given $6 billion to UNRWA since 1950 with the United States as the largest donor nation. But instead of solving the problem, UNRWA uses Palestinian refugees as political pawns in a campaign against Israel. Even worse, many UNRWA employees are affiliated with Hamas, teaching and promoting hatred among young people and hiding weapons in their facilities in Gaza.

What Are Some Practical Solutions?

UNRWA must give the Palestinians an honest assessment of their future and change its charter to adopt similar resettlement goals as UNHCR. Only those refugees without citizenship or permanent residency in their host country should be registered as a refugee. All funding to UNRWA should be redirected for the purposes of resettlement and the agency put on a five-year plan to shut down.

Working together, Israel, UNHCR, and UNRWA can identify bona fide refugees and implement affordable, effective plans. Putting UNRWA out of business and redirecting its budget into fresh, workable solutions would be a godsend to the Palestinian refugees.

– by Susan Michael, US Director, creator of IsraelAnswers.com and the American Christian Leaders for Israel (ACLI) network.