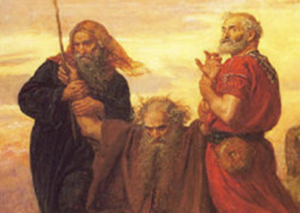 Exodus 17 tells how Amalekites, descendants of Esau’s grandson, attacked the children of Israel in the desert of Sinai during their exodus from Egypt. This unprovoked attack was especially serious and the Israelites battled all day, only achieving victory at nightfall.

In response to this demonstration of cruelty, the Lord told Moses that he would blot out the remembrance of Amalek from under heaven. Moses later recounted: “the Lord will have war with Amalek from generation to generation” (Exodus 17:16). Amalek’s attack on the children of Israel was now a perpetual war between him and the God of Israel.

Amalek was not just a foe, but a genocidal one, so in Jewish tradition the Amalekites came to represent the archetypal enemy of the Jews present in generation after generation. It is interesting to note that some one thousand years later, in the book of Esther, the arch villain Haman was an Amalekite who led the plot to kill the Jews.

This evil pursuit of the Jewish people has continued for millennia, which is why historian Robert Wistrich calls anti-Semitism “the longest hatred.” Every time this genocidal hatred seems to be dying out it reinvents itself with a different look and a different name. But the goal is always the same: to rid the world of the Jewish people.

In the ancient world, classical anti-Semitism was a clash between pagan rulers, who demanded obedient homage, and their Jewish subjects, who would only worship and obey the God of Israel. The Jewish people could not bow down to earthly leaders, and were bound by the Sinaitic Law to certain behaviors and observances that set them apart and incurred the wrath of their rulers.

After the rise of Christianity the problem did not go away. It is a travesty that anti-Semitism was then found in the heart of Christian Europe. Indeed, in the annals of those who persecuted and hated the Jewish people are professing Christians. Space does not permit a full treatment of this sad story, but centuries of state and church-backed denigration, persecution, forced conversions, and expulsions actually paved the way for the Holocaust.

Proof of this is found in the fact that Martin Luther’s anti-Semitic writings were published and distributed by the Nazis in order to justify their anti-Jewish laws and eventually their extermination program. Hitler admitted as much when he told two Catholic Bishops who questioned his policy that “he was only putting into effect what Christianity had preached and practiced for 2000 years.”

The form of anti-Semitism found in Nazi ideology was not based on religion, however, but on racial theories about the superiority of the Aryan race. Whereas Christianity had sought the conversion of the Jews, and state leaders had sought their expulsion, the Nazis sought the “final solution to the Jewish question,” the murder of all Jews and their eradication from the human race.

The good news is that these older forms of anti-Semitism are socially unacceptable in the 21st century. Religious bigotry and racism are frowned upon and are antithetical to the prevailing ideologies of globalism and secularism.

The bad news is that Israel, a Jewish nation-state, is also antithetical to both globalism and secularism. Therefore, the modern form of anti-Semitism that has found a stronghold and large-scale acceptance today is political. It is against the Jewish state and is called anti-Zionism.

There is still religious anti-Semitism, but this time it is found throughout the Muslim world and is responsible for the genocidal rhetoric emanating from Iran. Muslim anti-Semitism, however, is tolerated by anti-Zionist Western leaders who blame it on Israeli policies.

Not all criticism of Israel can be considered anti-Semitic. However, criticism of Israel becomes anti-Semitic when it delegitimizes the state and questions its right to exist, when it uses anti-Jewish rhetoric and stereotypes or compares Israelis to Nazis, when it judges Israel by a different standard than for any other nation, and when it becomes an excuse to attack local Jewish individuals and institutions.

During the 2014 war in Gaza, a defensive war on Israel’s part to prevent further missile launches from Hamas, there were attacks on synagogues and Jewish citizens in France, refrains such as “Jews to the Gas” in Germany, the use of swastikas at anti-Israel demonstrations, and anti-Semitic caricatures in newspapers and social media.

While America is a safe-haven today for Jews fleeing Europe, low levels of anti-Semitism here should not be taken for granted. As American Christians, we should take every opportunity to stand in solidarity with the Jewish community, attending their Holocaust remembrance events, and teaching our children to recognize anti-Semitism and take a stand against it.

This one is on our watch, and it is our responsibility to stand against it.