The Rest Of The Hanukkah Story 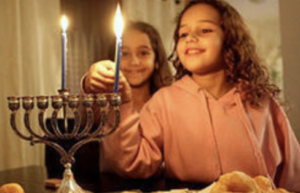 The story of Hanukkah takes place during the period in-between the Old and New Testaments, when Antiochus IV Epiphanes became the King of the Hellenistic Seleucid empire. While the Hellenization of the region, including Judea, already threatened the survival of the Jewish religion, Antiochus seemed obsessed with ensuring the demise of the Jewish faith and thereby, the future of the Jewish people.

He not only murdered the High Priest, Onias III, but he slaughtered 40,000 inhabitants of Jerusalem. All sacrifices, the service of the Temple, and the observance of the Sabbath and feast days were prohibited. The Temple was dedicated to Zeus, the Holy Scriptures were destroyed, and the Jews were forced to take part in heathen rites.

In his attempt to destroy every trace of the Jewish religion, the final assault was the slaughter of a pig on the sacrificial altar of the Temple, thereby desecrating it. The Maccabean family, from the priestly line of Aaron, led a revolt against this evil ruler and miraculously experienced victory after victory over the mighty Greek forces, until at last the Temple could be purified and its services restored.

As I noted in my article “What Jesus Understood About Hanukkah,” the revolt against the forces of Hellenization actually saved the Jewish people from extinction because they would have assimilated into the pagan culture around them. This preservation of Judaism and the rededication of the Temple helped set the stage for the birth of Jesus into a traditional orthodox Jewish home in Judea. It is no surprise that He went to the Temple for Hanukkah – the Feast of Dedication – in John 10.

The End of Antiochus and His Empire

But wait, there is more to the story. The rededication of the Temple took place on the 25th day of Kislev, which was December 14, 164BC. Within weeks, if not days, the evil Antiochus IV Epiphanes died suddenly. The Greek historian Polybius said that Antiochus was on an expedition to the eastern part of the empire to rob another temple when he died of a sudden illness and “certain manifestations of divine displeasure.”

Polybius hints at the very real possibility that the King suffered judgment by God. Whether he understood it to be the God of the Jews we do not know. The non-canonical book of 2nd Maccabees claims that he did. But, his sudden death is just one example out of many of the demise of those who have come against the Jewish people. Upon the king’s death, the Seleucid kingdom began to weaken and fell into irreparable decline.

The Bible is clear that God will judge the nations over their treatment of the Jewish people. Both Old and New Testaments teach this, and the principal has been played out over and over throughout history.

The most obvious explanation is the Jewish people are very special to Him. He did not just choose them, but created them through Sarah who was past child-bearing years, and He takes their treatment by others very seriously.

More than this, God uses Israel to test the hearts of the nations, thereby exposing either their goodness, which leads to blessing, or their evil intent, which leads to judgement. Some have likened Israel to litmus paper that when dipped into water shows whether the water is acidic or alkaline. Israel exposes what is in the heart of people.

George Gilder, a venture-capitalist businessman, proposes in his book The Israel Test that Israel presents a moral and ethical challenge to the world and therefore has become the ultimate fault line. At the root of the Israel Test is the knowledge that Israel is contributing more to the human cause through its scientific, technological and financial advances than any other country in the world, except the US. He predicts that over the next two decades, Israel will grow into the dominant economy in the Middle East and one of the most productive economies in the world.

This is the test that Israel presents to the world: what is your attitude towards people who excel you in the creation of wealth or in other accomplishments? Do you aspire to their excellence, or do you seethe at it? Do you admire and celebrate exceptional achievement, or do you impugn it and seek to tear it down?

God is using Israel to test the hearts of the nations and their future will be determined by how they respond. Could it be that the same test is at operation within the Church?

In Romans 11, the Apostle Paul addresses the attitude of the Roman church towards the Jewish people. He warned the believers to make sure their attitude was humble and honoring of the Jewish people. He even cautioned them about possible judgment by God if their attitude was not right. A church that honors its Hebraic roots, as wild branches that are grafted into the olive tree, receives great strength and nourishment. To dishonor the very root that supports our faith brings spiritual decline and even death.

Antiochus IV Epiphanes failed the Israel Test and his kingdom is long gone. Others throughout history have also fallen short on the test and experienced decline and extinction. My prayer is that our nation and our churches pass the Israel Test, exhibiting good hearts, and experience the many blessings God has promised.