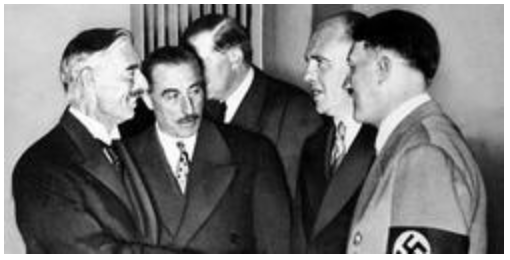 The “big lie” is an expression coined by Adolf Hitler to describe his propaganda technique of telling a lie so colossal that no one would believe someone “could have the impudence to distort the truth so infamously.” He first described this concept in Mein Kampf (German for “My Struggle”), the autobiographical manifesto outlining his plans for ruling Germany.

Hitler proposed that the big lie is credible because the broad masses are less likely to fall for a small lie. This is due to the fact that they themselves often tell small lies in little matters but would be ashamed to resort to large-scale falsehoods.

It would never come into their minds to fabricate colossal untruths, so they would not believe others had either. In other words, Hitler understood that the masses saw the world through rose-colored glasses tinted by their own basic honesty and their assumption of that same trait in others.

Propaganda was the tool Hitler would use to convey the big lie and get the support of the masses. Successful propaganda would speak to their emotions more than to their intellect, be limited to a very few points, and would harp on slogans. He said that the repetition of simple slogans was necessary because the receptivity of the masses is very limited while their power of forgetfulness is enormous.

Hitler’s words ring with a chilling truth. In spite of how evil his plan was, he knew how to get it past the people. When he became the Head of State in Germany, Hitler implemented his strategy precisely. He fabricated the “big lie” of the evil Jew causing Germany’s troubles, and he used propaganda to prepare the way for their final extermination. It worked.

Hitler’s strategy is still working today, just not in Germany. It is the Arab masses that are now being sold the big lie and worked up into a propaganda-fed frenzy. Mein Kampf was translated into Arabic back in the 1930s and has been one of the all-time best sellers throughout the Muslim world since.

It is no coincidence that Muslim leaders, such as Iran’s Supreme Leader, have adopted Hitler’s strategy. They are propagating the “big lie” of the evil Jews (particularly Israelis), using emotionally charged slogans and anti-Semitic cartoons to get the support of the people, and preparing the way for the final annihilation of Israel.

Anti-Semitism is now at epic proportions throughout the Muslim world where conspiracy theories run rampant and all types of lies are believed about Israel and the Jewish people. There is no better example of this than in the Israeli-Palestinian conflict. Palestinian leaders can be heard rejecting any historical connection of the Jewish people to the land of Israel (as chronicled in the Bible and backed up by archeology), denying there was ever a Jewish Temple on the Temple Mount, and claiming Moses and Abraham were Muslims while Jesus was a Palestinian.

One of the most effective campaigns based on complete fabrication is that Israel is an Apartheid State. The accusation is a serious one, claiming that the world’s one and only Jewish state is racist, with institutional discrimination and military occupation of non-Jews. The proponents call for the international community to impose boycotts and divestment in order to pressure the evil Israelis.

The inspiration for this campaign comes from the dismantling of South Africa’s Apartheid regime in 1994 after several years of protests and the imposition of international sanctions. So the goal of the campaign against Israel is the same: that one day she too will be dismantled.

The only problem is that in this case the accusation is just not true. Admittedly, the Arab minority in Israel has special challenges over and above the usual minority difficulties due to the security situation. However, Israeli Arabs study in universities with Jewish students, shop in the same malls, take the same buses, run their own political parties with members in the Israeli Knesset, have become famous athletes, have won Miss Israel competitions and even served as a Supreme Court Judges.
Israeli Arab, Salim Joubran, served on the Supreme Court panel that upheld the rape conviction for President Moshe Katzav. He also served as Chairman of the Central Election Committee, overseeing the hotly contested 2015 national elections that resulted in Netanyahu’s Likud party victory.

Clearly, this is not an apartheid state. Nevertheless, many university students around the world are being taught this slogan as though it were fact.

The problem is that what comes after the “big lie,” catchy slogans and anti-Semitic cartoons will be attempts at extermination—whether on a small scale or mass one, such as Iran threatens to do to Israel. This is why the lies must stop.