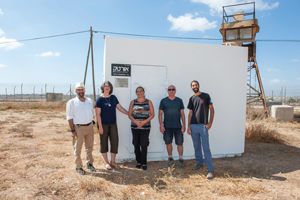 Over recent months, the ICEJ has been busy donating three dozen new bomb shelters to Israeli border communities that are especially vulnerable to rocket and mortar fire from Gaza and Lebanon. The funds for these three dozen shelters have all been raised from Christians worldwide in the short time since the Hamas rocket war last May. With these new shelters, the ICEJ has now donated a total of 161 portable bomb shelters to Israeli communities under rocket threat since 2007, with most (130) placed in towns along the Gaza border and the remaining shelters deployed in the North.

Over the past decade or so, the ICEJ has placed dozens of mobile bomb shelters in communities in the Gaza envelope, stretching from Kerem Shalom in the South all the way up to Ashkelon. Hamas rocket barrages from neighboring Gaza have repeatedly battered this area. Most of our bomb shelters have been donated to schools, daycare centers, medical clinics, youth centers, community halls, university campuses, factories, and other public places that serve a social purpose and can only operate during times of crisis if they have adequate bomb shelters.

Meanwhile, concern is increasing over the lack of public shelters in the North. A state comptroller report issued last year warned that 2.6 million residents of 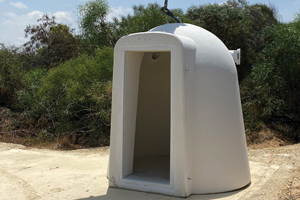 Northern Israel do not have access to functional bomb shelters. Thus, the Christian Embassy is increasing its efforts to assist towns in the northern Galilee and Haifa regions.

The need for more shelters is most acute in the towns along the northern border with Lebanon, which are prone to shorter-range rockets that the Iron Dome system cannot stop. This hilly, forested area contains a diverse mosaic of Jewish, Arab, and Druze towns desperately looking for funding to provide better protection for their communities. Other areas of concern are the farming villages in the Zevulun regional council just east of Haifa close to strategic facilities—such as oil storage tanks and chemical plants that Hezbullah is expected to target in future conflicts.

In recent weeks, the ICEJ has delivered bomb shelters to several Jewish and Arab communities in the Zevulun region and an Israel tennis facility in Akko that teaches tennis and other sports to Jewish and Arab youths from disadvantaged families. We have also continued to fulfill our commitments for additional shelters in farming villages along the Gaza border, including Kibbutz Usha (two kindergartens); Kibbutz Nahal Oz (guard tower); Kibbutz Or HaNer (security gate); Kibbutz Beror Chayil (soccer field); Kibbutz Nir Am (museum and café); and Moshav Mivtahim (tomato packing plant). 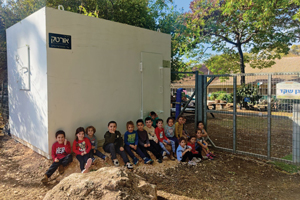 Since the last rocket war with Hamas in Gaza last May, the ICEJ has received donations for new bomb shelters from Christians in Brazil, Canada, China, Czech Republic, Fiji, Germany, Ireland, Netherlands, South Africa, Switzerland, United Kingdom, United States, and many other countries.

“These mobile bomb shelters truly save lives and give Israeli families the peace of mind they need to continue their daily lives under the constant threat of rocket attacks,” said ICEJ President Dr. Jürgen Bühler. “We now want to focus more on the need for additional bomb shelters to protect civilians in the North. In selecting where to place these shelters, we also are looking to meet other social needs in these communities and to promote Jewish-Arab coexistence.”