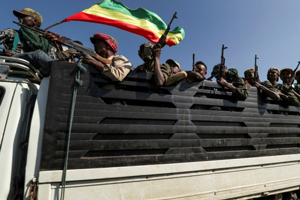 In its modern history, the nation of Israel has mobilized twice to carry out emergency airlifts of the ancient Ethiopian Jewish community and bring them safely home. In 1984, Operation Moses was launched to bring over 8,000 Ethiopian Jews who had started out on foot for Israel but wound up stranded and starving in war-torn Sudan. Then in 1991, Operation Solomon brought home nearly 15,000 more endangered Ethiopian Jews in a dramatic rescue effort conducted over one single weekend.

Now, recent events in Ethiopia have Israeli leaders speaking of the need for yet another emergency airlift of this ancient Jewish community. The East African country is descending again into civil war and famine conditions are returning. The remnant of Jews still in Ethiopia are living in poor transit camps in Addis Ababa and Gondar awaiting their turn to move to Israel. Israel’s government already made a commitment in 2015 to bring them home to the Promised Land over several years of time, but they now realize that may be too late.

Thus, Israeli authorities are making plans to airlift some 5,000 Ethiopian Jews to Israel in the next few months, and The Jewish Agency For Israel is urgently asking the International Christian Embassy Jerusalem to help!

A tribal conflict which broke out last year between the large Amhara and Tigray tribes has re-escalated in recent months. The rebel Tigray militia has acquired new arms and allies, captured more ground, and is threatening to march on the capital of Addis Ababa, prompting the prime minister to declare a state of emergency. There are disturbing reports of atrocities being carried out on all sides, as entire villages are being wiped out. The conflict has already claimed thousands of civilian lives and forced more than 2.5 million people to flee their homes. Meantime, there is growing civil unrest throughout the country, as well as concerns over food shortages due to the worsening drought and famine conditions. Many nations are warning their citizens to leave Ethiopia.

The Jewish remnant still in Ethiopia are part of the ‘Falash Mura’ community who have Israelite ancestry but were forced under duress to convert to Christianity several generations ago. They want to rejoin their relatives already living in Israel, but have been stuck in decrepit transit camps for more than two decades now awaiting their turn to immigrate. The Israeli government has committed to bringing them several hundred at a time, but that pace may no longer be possible.

Watching the civil war escalate in their former country, Ethiopian Jewish leaders in Israel are now calling for an “Operation Solomon II” – yet another emergency airlift to rescue the last of their community in Addis Ababa and Gondar. Israel’s cabinet agrees that swift action is needed and Pnina Tamano-Shata, the government’s Minister for Aliyah and herself an Ethiopian Jewish immigrant, is spearheading the plans to speed up their return.

In response to Israel’s urgent appeal for our assistance in this airlift, the Christian Embassy is hoping to sponsor flights for at least 200 Ethiopian Jews in this first wave of immigrants being lifted out of Ethiopia, which is expected in December. As funds become available over coming months, we will continue to be a central part of this historic third airlift of the Ethiopian Jewish community to Israel.

Since the Israeli government decided six years ago to bring home the last remnant of some 9,000 Ethiopian Jews, around 4,000 have made it here so far, and the Christian Embassy has sponsored more than half of those flights. With your help, we can continue to play a major role in completing the return of Ethiopian Jewry.