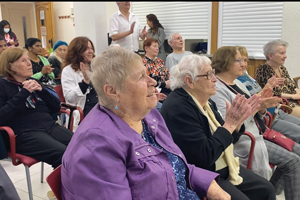 In the last week of February 2021, the community dining hall at the ICEJ’s Haifa Home for Holocaust Survivors was reopened. After a year of eating separately at home due to coronavirus health rules, the day finally arrived that everyone had been waiting for. The dining room was buzzing with the sounds of happy voices; people greeted each other with excitement, elated they could enjoy dining together again. Having to dress up and walk to the dining room to see friends’ smiling, familiar faces helped make residents feel happier and, in the long run, healthier.

Only those residents who had received their full doses of vaccinations were allowed into the room, which was almost everyone. Then, at the beginning of March, we also started to serve the evening meal in the dining hall. Residents were overjoyed at the new look of the room, as we were able to buy new dining chairs that are much more comfortable for our aging residents and that also give some color to the hall.

The Pesach (Passover) celebration, which marks Israel’s redemption from slavery in Egypt and freedom to serve God, had added meaning this year. Unlike last year, families and friends could again gather around the Passover Seder table. Unfortunately, many Holocaust Survivors are homebound and do not have a family with whom they can celebrate this important festival.

Recognizing this need, the ICEJ joined hands with an initiative called “Pesach with Dignity.” Five top Israeli chefs gave their time and brought their coworkers along to cook a gourmet meal in a large kitchen at a hotel in Tel Aviv.

“I’m always trying to join a project that reaches out to those in need,” said top Israeli chef Benny Bezza. “This year it is an honor to be part of this wonderful initiative. We will work as long as it takes so that thousands of people will be able to enjoy a nice meal during Pesach.”
Volunteers from all walks of life helped to distribute the delicious meals to the homes of Holocaust Survivors all over Israel. At least 1,000 Survivors enjoyed a delicious, cooked meal this Passover through this special project.

A film crew from Israeli TV, Reuters, or some other media outlet is a fairly common sight at the Haifa Home. Yet just before Israel’s annual Holocaust Memorial Day on the April 8, 2021, a rush of TV channels and journalists visited the Home to hear stories from the residents about their lives and to catch a glimpse of their daily life in the Home.

These stories were then featured on television and in newspapers in a special way on Yom HaShoah (Israel’s Holocaust Memorial Day). For instance, the Israeli daily newspaper Ha’aretz published an especially warm article, “German Volunteers in Israel Find Themselves ‘Welcomed and even Loved’ by Holocaust Survivors.” Referring to the ICEJ’s three German Christian volunteers serving at the Home (Debora Wanner, Natalia Ochs, and Kerstin Hoffman), the report quoted Survivors as expressing deep appreciation for their love and care.

“I am happy I can speak to her—not everyone knows German,” 93-year-old Sophie Leibowitz told Ha’aretz about her German Christian nurse Natalie Ochs. “They are not guilty of anything. It was their parents or grandparents. It’s been almost 80 years. We’re already past that here in Israel . . . We don’t think about their religion. We need their help, and they help us.”

Meanwhile, another Survivor, 92-year-old Fanny Zelekovic, said of Debora Wanner: “She is like family, like a sister. She has a heart of gold.”

When asked what she thought of all the media attention, resident Naomi answered: “It is not that I am in any way looking for media attention for myself, but I feel it is my obligation to share my story. We are the last that have gone through it and can give witness.”

A crew from Channel 13 in Israel filmed segments for a special two-hour telethon held to raise money for the Haifa Home. For the occasion, Vesna Bühler was on hand to give the first concert in the Home since COVID-19 hit the country. Being together and hearing the sound of beautiful music was like balm to our residents’ souls. After the concert, they thanked Vesna and her husband, ICEJ President Dr. Jürgen Bühler, for being there. They also shared their hearts about the difficult year and the blessing our ICEJ team has been for them.

Sadly, the numbers of the remaining community of Holocaust Survivors in Israel are dwindling. In the past year since Israel’s Holocaust Memorial Day in 2020, records show that 14,264 registered Holocaust Survivors have died—about 41 every day. Presently, 31,000 are older than 90 years old, and more than 900 are over 100. Roughly 25 percent live under the poverty line.

We still have the privilege of knowing them and taking care of some of them.

Our Haifa Home residents are invited to many different places to talk about their past during this time of remembering the Holocaust. Even though it is difficult to share about the trauma in their lives, it weighs heavily on their shoulders, knowing that they are the last witnesses. Mordechai, a Polish Survivor, exclaimed: “If we do not do it, who will remember?”

The heaviness on Yom HaShoah, Israel’s annual Holocaust Remembrance Day, is tangible. At 10:00 a.m., the siren is heard all over Israel, and the nation pauses and stands to remember the six million Jews who perished in the Nazi genocide. It is difficult day for the Survivors, but as Sofie—a Survivor from Transnistria—said, “It’s like we go to visit the grave of our parents, who perished. It is a time to be together and to remember. We need it.”

On Yom HaShoah this year, a solemn ceremony was held once again in the street outside our Haifa Home, and those attending included hundreds of local Survivors and their families, as well as Israeli cabinet minister Eli Cohen, members of the Knesset, dignitaries from Haifa, and many soldiers and police.

Yudit Setz, ICEJ Haifa Home Coordinator, was invited to be the first speaker—and she spoke to the Survivor’s hearts with words of love and comfort on this difficult day:

I know that even after about 80 years, the pain of loss is still very deep every day with you. Thank you so much for sharing your story these past few days on TV, radio, to school classes, and to army units. I know how hard it is for you. You are our last witnesses, and the next generations need to hear and learn from you in order to appreciate this beautiful country even more and protect it. . . . As [the] ICEJ, we will continue to stand with you and take care of you. We will continue to teach the next generations about the Holocaust and the lessons from it, so we can stand for what is right and fight against the growing anti-Semitism. May God help us all.

After the ceremony, our residents engaged with groups of IDF soldiers. Naomi, a Survivor from Romania, said: “It so helps us, all this attention. It makes this difficult day easier, so we don’t have to sit alone with our memories at home behind the TV.”

Be part of this amazing work by supporting the Haifa Home.