Why is Anti-Semitism so Dangerous?

There is no room for complacency 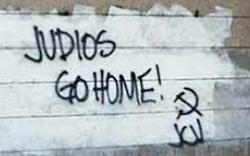 Nothing can unite people in pursuit of a common cause like hatred. And no ideological movement is more dangerous than one held together by the hatred of a demonized enemy.

Anti-Semitism—singling out the Jewish people as the root of society’s ills—is an early warning system for such hateful movements. It is often described as a “canary in the mineshaft,” warning us that a Pandora’s box of death and destruction is about to be opened.

Why is anti-Semitism so dangerous?

Unites Against a Common Enemy

In his 1951 book about mass movements entitled The True Believer, Eric Hoffer explained that mass movements are not built so much on a group’s positive beliefs or goals but on their opposition to an enemy. “When Hitler was asked whether he thought the Jew must be destroyed,” Hoffer recounts, “he answered: ‘No … We should have then to invent him. It is essential to have a tangible enemy, not merely an abstract one.’”

Hitler understood that the ideal “enemy” would unify Germany and would deflate the resistance of the surrounding countries he intended to occupy. He knew that by demonizing the Jews, any Nazi failure could be blamed on them and every success seen as a triumph over this evil devil.

When once asked if he was attributing too much importance to the Jews he exclaimed: “No, no, no! … It is impossible to exaggerate the formidable quality of the Jew as an enemy.”

When Hitler unleashed anti-Semitism and built the Nazi movement on the hatred of Jews, he plunged the world headlong on a path of destruction. Not only were 6 million Jews exterminated but some 50 million people died in WWII. Among the dead were churchgoing Germans and Russians, not to mention hundreds of thousands of allied forces.

Today, anti-Semitism is rampant in the Muslim world. Arab leaders demonize the Jews, focusing their nation’s anger toward Israel and away from the socio-economic problems at home. Those in quest of pan-Arab leadership must use hatred of a common enemy to unite the otherwise divided Arab world behind them.

The founding of Israel in 1948 fueled this attitude. In their attempt to delegitimize the fledgling Jewish state, Arab leaders like Egyptian President Gamal Abdel Nasser promoted all kinds of anti-Semitic literature and rhetoric. Arab states became propaganda machines for anti-Semitism, brainwashing generations of their people with hateful ideas about Jews.

Since then, the demonization of Jews has only grown worse. Today, state-sponsored propaganda permeates the Muslim World and anti-Semitic curriculum is common discourse.

But it’s not just happening within the Muslim world. Anti-Semitism is impossible to ignore in Europe—especially in France where synagogues, schools, and bagel shops are routinely defaced with anti-Semitic graffiti. Just this past year in Germany, following an increase in attacks against Jews, the German government warned Jewish men against wearing kippahs in public.

In the past, anti-Semitism seemed far from North America, but now even Canada and the United States are experiencing a dramatic increase in anti-Semitic activity. On October 27, 2018, American Jewry changed forever when 11 people were killed by a madman yelling “all Jews must die” at the Tree of Life Synagogue in Pittsburgh, Pennsylvania—on Sabbath. It was the deadliest anti-Semitic attack on US soil.

Last month, two Jewish boys wearing kippahs were assaulted north of Toronto, Canada. “Juden” was found carved into the door of synagogue in Venice Beach, California. And two identifiably Jewish men were struck with stone pavers in the same week in Brooklyn, NY.

Propaganda against Jews—alarmingly similar to that used in pre-Holocaust Europe—is also surfacing on US soil. This September, swastikas, messages advocating violence against Jews, the slogan “Hitler 2020,” and stickers depicting Anne Frank painted over in red were found at the historic Fort Revere Park in Hull, Massachusetts. Newspapers are printing anti-Semitic cartoons. And a flyer was recently found in San Francisco blaming Israeli Jews for 9/11.

There is also a marked increase in hostility on college campuses toward Jewish students who support Israel, further fueling anti-Semitism among students. A roundup of anti-Semitic activity includes swastikas painted on doors, mailboxes, and landmarks, spray-painted racial and anti-Semitic graffiti in residence halls, and vandalism of Jewish symbols like menorahs. Little is done to quiet these groups.

Anti-Semitic rhetoric and propaganda once repulsive to most Americans (and unacceptable) are quickly becoming commonplace, if not accepted.

Creates Climate for Acceptance and Growth

This modern-day anti-Semitism has a different but still satanic edge. It involves prejudice against the Jewish movement for self-determination and the right of the Jewish people to a homeland—the State of Israel. Called “Anti-Zionism,” it can include threats to destroy the State of Israel (or otherwise eliminate its Jewish character), unfounded and inaccurate characterizations of Israel’s power in the world, and language or actions that hold Israel to a different standard than other countries.

To be clear, hatred of Israel is not in and of itself anti-Semitic. However, antagonism toward Israel can mask anti-Semitism. Criticism of Israel crosses the line to anti-Semitism when all Jews are held responsible for Israel’s actions, when Israel is denied the right to exist as a Jewish state and equal member of the global community, and when traditional anti-Semitic symbols are used.

Whether anti-Zionism is motivated by or the result of anti-Semitism, it’s creating a climate in which anti-Semitism is becoming more acceptable—and for which it can grow and spread.

When millions of Muslim immigrants settled in European countries like Sweden in 2015, they brought anti-Israel sentiment with them. Over a short amount of time, this negativity has become part of the culture of Europe. Jews are often conflated with Israel and held responsible for its perceived misdeeds, and the general population now thinks twice about voicing support—knowing such support has potential consequences. Europe is once again unifying against a common “enemy,” but this time it’s the nation of Israel, and anyone identified with Israel (i.e., the Jews).

The most unifying motivator in mass movements is finding a common enemy to hate and demonize. It’s happening in the Muslim world and in Europe, and the soil prepped for it to happen in the West, too.