Why Is the Aliyah of the Ethiopian Jews Critical? 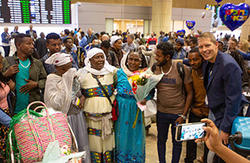 The origin of the Ethiopian Jews is a bit of a mystery. Most agree they are descendants of Israelites who migrated to the area at one time or another.

One theory allows for migrants as early as Moses’ time when the Israelites were in nearby Egypt. Another possibility is that the interactions between the Queen of Sheba and King Solomon may have brought about a migration, if not a rumored offspring. Still another theory posits that some of the tribe of Dan made their way to the region when fleeing the Babylonians in the sixth century BC. Genetic tests indicate that some may have intermarried with Yemenite Jews who fled to Ethiopia during several different periods of conflict in Yemen.

Whatever their origins may be, the fact is thousands of Jews lived in the northeast region of Ethiopia for centuries. They were cut off from the rest of the world and faithfully observed the Jewish faith as it had been practiced before the destruction of the temple and the influence of Rabbinic Judaism. They developed their own interpretations of the law and added some of their own feast days. They knew no Hebrew because their Scriptures were written in Ge’ez, and they spoke Amharic.

Ethiopian Jews had no contact with the outside world; therefore, they thought they were the only Jews left on the planet and subsequently endured generations of hardship to sustain their Jewish identity. They practiced their form of Judaism and longed for the day when they would return to Zion. They called themselves “Beta Israel” (House of Israel), while their neighbors derogatorily called them “Falashas”—the alien ones.

Their mysterious story is one of a beautiful, simple faith alongside centuries of difficulty. They suffered from dictators, famines, and wars along with their fellow countrymen, but they also faced discrimination because of their faith. They were cut off from and later neglected by the larger Jewish world, all the while hoping for a return to the ancient homeland they had read about in their Scriptures.

God heard their prayers, and the Beta Israel came into contact with other Jewish communities in the nineteenth century. In 1977, Israeli officials approved their immigration based on the Israeli Law of Return and began Aliyah operations, including Operations Moses and Joshua in Sudan from 1979 to 1990 and Operation Solomon from Addis Adaba in 1992. Hence, they became the only black African population ever brought to a non-African country for freedom.

Today, some 140,000 Ethiopians live in Israel, and while their cultural and religious acclimation has been difficult, they are beginning to enter Israeli society and its work force in increasing numbers.

Not all of the Jews in Ethiopia, however, have been able to realize their dream, and some 8,000 remain—most of them living in deplorable conditions. They left their work and villages 15–20 years ago to register with Israeli officials and wait in makeshift camps for their turn to immigrate. Because they expected to make Aliyah soon, they did not create new means of income, plunging them further into poverty as time went by.

Most live in mud shacks, without electricity or running water. Many of their children are malnourished, and at this point, their remaining Aliyah is a rescue operation. Each year the Israeli government approves the Aliyah of roughly 1,000 more Ethiopians.

Their arrival at Ben Gurion airport is particularly moving with emotional embraces and tears of joy as parents reunite with children, sisters reunite with brothers, and grandchildren meet their grandparents for the very first time. Their joy is only dampened when they remember the many who died back home as refugees, or as a result of famine, and who will never see the Zion they dreamed of.