A New Chapter in the Hanukkah Story

The Jewish people are being denied their Bible, history, faith, and holy sites 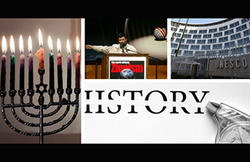 In his attempt to force the Jews into compliance, Antiochus IV slaughtered 40,000 inhabitants of Jerusalem; murdered the High Priest; and prohibited sacrifices, the service of the Temple, and the observance of the Sabbath and feast days. The Temple was dedicated to Zeus, and then desecrated with the slaughter of a pig on the sacrificial altar.

The Maccabean family, from the priestly line of Aaron, led a revolt and miraculously experienced victory after victory over the mighty Greek forces until, at last, the Temple could be purified and its services restored. Hanukkah is known as the Feast of Dedication because it commemorates the cleansing and rededication of the Temple to the God of Israel. Its symbol is the Temple Menorah which allegedly burned miraculously for eight days on just a small amount of oil.

This story, however, is about more than an evil ruler. He was imposing the ruling culture and ideologies of the empire upon the Jews, including paganism and an immoral pagan society; as well as the Greek language; culture; and ruling philosophies of reason, humanism and pursuit of knowledge. This is how kings subdued and controlled the people in their kingdoms.

In the ancient world, Jews often clashed with pagan rulers such as Antiochus Epiphanes, who demanded obedience to them and homage to their gods as a means of proving one’s loyalty. The Jewish people could not bow down to these pagan leaders, nor their gods, and were bound by the Mosaic Law to certain behaviors and observances that set them apart from other societies and brought upon them great persecution, exiles, and threats of extinction.

A new chapter in the Hanukkah story is being written today—godless world leaders are attempting to impose on all of us the ideologies of secularism, globalism, and moral relativism. Once these ideologies take hold, the masses can then be easily controlled, because they will have no loyalty to a religious creed, national identity, or moral code.

Israel, a Jewish nation-state, is antithetical to all three of these modern ideologies. Therefore, its Jewish national identity is accused of being racist by secular globalists. The very nation that gave to the world the Ten Commandments, on which Western civilization bases its legal code and definition of morality, is hated by those attempting to impose their ideology of moral relativism: the belief that there is no objective right or wrong, truth or falsehood, nor good or evil.

The seemingly contradictory part of this secular movement is that its proponents are not just tolerating but are assisting in the global dominance of Islam—a religion with a very strict legal and moral code that it seeks to impose on the world, especially upon the secularist “infidels!” There is only one explanation for this strange alliance and that is deep down, both movements share something in common: they are both anti-Christian and anti-Semitic at heart.

In this context, the recent attempt by the United Nations Educational, Science, and Cultural Committee (UNESCO) to deny the historical and biblical connection of the Jewish people to Jerusalem and, indeed, all the land of Israel begins to make sense. The Arab voting block and their secular, globalist cohorts in the UN, ignore what is a written and historical record of ownership by the Jews.

Islam teaches that the Jewish and Christian Bibles are corrupted. Therefore, Muslims completely disregard biblical accounts proving Jewish ties to the land of Israel, including the city of Jerusalem, and most importantly, the Temple Mount.

This is in spite of the fact, the biblical record has been backed by one archaeological find after another proving not only the existence of the Jewish Temple on the Temple Mount, but a 3,000 year history of Jews in the city of Jerusalem. Islamic groups bent on taking over Israel, therefore, prefer to destroy archaeological remains than allow them to prove a historical record that stands in their way.

This history, however, is not just found in the Bible, or in archaeological finds, but in historical Ottoman Empire decrees, and in many Muslim writings. The truth of the matter is, that to destroy all evidence of the existence of the Jewish Temple on the Temple Mount, they would also have to destroy Muslim artifacts such as the recently excavated central mosque in the village of Nuba near Hebron. Inside is a thousand-year-old Arabic inscription that calls the Dome of the Rock “Bait al-Maqdess,” the Arabicized version of “Beit Hamikdash,” the Hebrew name for the Temple.

This is the new chapter in the Hanukkah story: leading world powers attempting to deny the Jewish people their Bible, history, faith, and holy sites. Because they won’t comply, they are demonized and threatened with extinction.

The Jewish Bible is Our Bible

Christians need to stand up on behalf of Israel and the Jewish people because their Bible and history of faith is also ours. If we do not speak up and stop these attempts to rewrite biblical and historical fact, we will one day wake up to the reality that Evangelical Christians are next on the list of undesirables.

The Hanukkah story is a reminder that when we stand up against the mighty powers of our day, we do so not in our own strength, but with God’s help. No matter how hard it may look, we can expect to take back lost territory and rededicate ourselves and our nations to the God of the Bible. He will give us the power to become a light—like a Hanukkah Menorah—shining forth into a dark world, bringing hope and truth to those with hearts to receive it.

Susan M. Michael is US Director for the International Christian Embassy Jerusalem.  Her writings can be found at www.icejusa.org/susans-blog