Will Trump Move The US Embassy To Jerusalem? 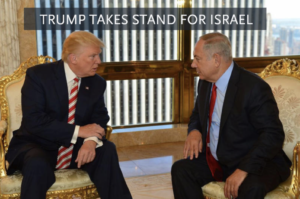 The United Nations Educational, Science, and Cultural Committee (UNESCO) recently attempted to deny the historical and biblical connection of the Jewish people to Jerusalem and, indeed, all the land of Israel, by referring to the Temple Mount and other Jewish holy sites only by their Muslim names. In response to this blatant denial of scripture, many Christians mailed Bibles to the agency’s headquarters in France.

Title Deed to the Temple Mount

The Bibles sent to UNESCO had many scriptures highlighted such as where King David purchased the threshing floor of Arauna in Jerusalem and placed the tabernacle there; then King Solomon built the First Temple there; Cyrus, the King of Persia, authorized and paid for the rebuilding of that Temple; and where Jesus was dedicated in the Temple, frequented there throughout His life, and was passionate for it, calling it “My father’s house” and a “house of prayer for all people.”

In 2 Samuel 24:18-25, King David wisely purchased the threshing floor of Arauna, and did not accept it as a gift. That property has become the most hotly contested piece of real estate on the planet. The Lord knew what David could not have fathomed, that 3,000 years later the world would come against his descendants’ right to own that piece of property and would deny  David had bought it, or that a Temple had even stood there for a thousand years! Therefore, the purchase is recorded in scripture so generations of believers would know the truth.

Only God could have foreseen how the United Nations would oppose Jerusalem being a part of the Jewish State in 1947; how Jordan would occupy half of the city, including the Temple Mount, until 1967; and how all of the nations would, therefore, refuse to place their embassies there and recognize it as the capital of Israel—even the United States!

Moving the US Embassy to Jerusalem

The US Congress approved the Jerusalem Embassy Act in 1995 that declared Jerusalem to be the capital of Israel and called for the US Embassy to be moved there. As a political compromise, a provision was included that allowed the President of the United States to delay moving the Embassy due to national security considerations. Every six months, that waiver has been signed by each president since 1995.

President-Elect Donald Trump has said he will move the US Embassy to Jerusalem. He affirmed this when he was the only presidential candidate to accept the ICEJ’s Five Guiding Principles for Israel, which included moving the American Embassy. Based on this, as well as his campaign’s Israel policy released right before the election, he is expected to be a friend to Israel and the Jewish people as President.

First, if anyone can get away with it, Donald Trump can. No one expects him to operate within the confines of political correctness, nor be swayed by threats and negative reactions like establishment politicians would have been. Therefore, reactions to such a move may be subdued.

Second, the larger Muslim world is in complete disarray with much bigger problems on their hands such as a nuclear Shi’ite Iran, and the threat of ISIS taking over their countries.

Third, the countries closest to Israel, posing the greatest threat, are consumed with either civil war, economic crisis, or a crippling refugee burden. The Palestinian cause is, therefore, much lower down on their priority list these days.

Either Way the Christian Embassy is there!

In light of such ongoing controversy surrounding Jerusalem, the establishment of the International Christian Embassy Jerusalem in 1980 was a God-inspired initiative just for these times. While the nations line up, either for or against His people, there is an embassy representing millions of Christians who are trumpeting the truth of the Bible, standing in support of His people, Israel, and their capital city, Jerusalem. Only God!

Susan M. Michael is US Director of the International Christian Embassy Jerusalem www.icejusa.org and her writings can be found at www.icejusa.org/susans-blogFor information on the ICEJ’s “Send a Bible to UNESCO” campaign go to https://us.icej.org/bibles-to-unesco