Why Should Christians Support Israel?

God chose Abraham and his descendants to bring about the world’s redemption. 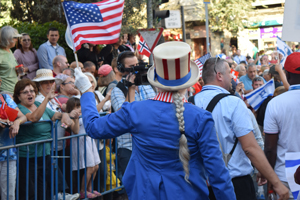 Why do hundreds of millions of Christians around the world stand with Israel? There is not one answer. The truth of the matter is that the bond between Christians and Israel is as multifaceted as it is strong.

Theologically, Christian Zionists believe in God’s promises to Abraham, which made clear that the land of Israel was bequeathed to the Jewish people as an everlasting possession. God chose Abraham and his descendants to bring about the world’s redemption. The return of the Jewish people to their ancient homeland represents the fulfillment of God’s promise to Abraham and as such, demands Christian support.

Christians who know their Bible will also point out that the text commands us to pray for the peace and well-being of Jerusalem in Psalm 122:6, and to serve as watchmen on the walls of Jerusalem in Isaiah 62:6-7. In Romans 9-11, the Apostle Paul is clear that the church should honor the Jewish people for their theological contributions to the foundations of Christianity.

Gratefully, Christians support Israel in gratitude for the protection of their Christian brothers and sisters. While religious minorities face intense persecution across the Middle East, Israel provides the only safe haven for Christians and is consequently the only country in the region where the Christian community is growing.

Personally, for millions of Christians, the Bible has come alive on their life-changing visits to Israel, which instills an enduring love for the Jewish state.

Historically, the Bible-based Evangelical Christian movement has preached from the scriptures that the return of the Jewish people to their ancient homeland would bring a great blessing upon the world. Modern Christian supporters of Israel follow in the steps of great Christian leaders such as John and Charles Wesley, Robert Murray MacCheynne, Charles Spurgeon and many other Puritan preachers.

Jerusalem, the City of David (Week 14)

Transforming Lives One Page at a Time

When Everyone Does As They See Fit (Week 12)

What Is the IHRA Definition of Anti-Semitism?