It Is Now Sunday In The Middle East 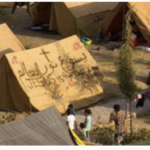 ‘When Saturday is gone, one will find Sunday,’ is an old, Christian Arab proverb that expresses their fear of sharing the terrible fate that has befallen the Jews. In other words, “when the Jews are persecuted, it is as inevitable that the Christians’ turn will come next, as it is that Sunday will follow Saturday.”

This proverb has also been used to threaten both Jews and Christians, such as on the eve of the 1967 Six Day War with Israel when Muslims chanted “First the Saturday people, then the Sunday people.”

There is no longer a need for this proverb. It has become a prophecy fulfilled. Just as the Jews were driven out of Muslim lands in 1948, Christians are now suffering the same fate.

The only difference is that the Jewish refugees had a place to go: the newborn state of Israel. Iraqi and Syrian Christians are the second largest Christian population in the Middle East after Egyptian Copts. They are now fleeing the barbaric forces of various Islamist factions and have nowhere to go.

When the Saturday People Fled

The Jewish population in the Middle East (outside Israel) and North Africa has declined from some one million in 1945 to less than five thousand today. While not all of them fled their homes as refugees, there were plenty of them who did. The situation was so bad that the front page headline of the New York Times on May 16, 1948 read: “Jews in Grave Danger in all Moslem Lands.”

Many of these Jewish communities had existed for some 2,600 years since the exile of the Israelites by Assyria in 722 BC. Over the centuries they moved throughout the region with the largest communities existing in Iraq, Iran, Egypt, and Libya. In the 1920s, 40% of Baghdad was Jewish.

Even so, Jews in the Middle East were often treated as second class citizens under Islamic laws of dhimmitude—the physical, economic, and societal submission of Jews and Christians to Islam. This submission of minorities permeated Muslim culture, so when the Nazi movement swept the area in the 1940s it was a deadly combination resulting in brutal pogroms and massacres in 1945.

It all came to a climax when the sovereign Jewish state of Israel was created in 1948, on land that had previously been under Islamic rule. Jews were seen as traitors, many had to flee, and others were expelled. Houses, businesses, and valuables were left behind and plundered. But at least they now had a place to flee.

Some 680,000 Jews fled Arab lands and lived in tents and huts in Israel. Israel had little money and infrastructure to care for the immigrants, but after a few years they were not only able to build a new life, but they helped develop the Israeli Defense Forces to defend themselves and generations to follow.

It is now Sunday in Iraq and Syria where many churches lie empty and destroyed. Thousands of Christians have been massacred; hundreds of thousands have fled. The ancient remains of the tombs of Daniel and Jonah have been destroyed by the jihadist group ISIS that is carrying out a barbaric campaign of ethnic and religious cleansing.

The Book of Acts tells us that there were Christians living in Damascus before the Apostle Paul had converted to Christianity. The Apostles Thomas and Thaddaeus brought Christianity to Iraq, making these Christian communities among the oldest in the world. Many Iraqi Christians are ethnic Assyrians who still speak Aramaic, the language of Jesus.

However, for the first time in 2,000 years, the city of Mosul—encompassing the site of the ancient Assyrian capital of Nineveh where the Prophet Jonah preached—now has no Christians. It is safe to estimate that at least two thirds of Iraqi and Syrian Christians are now displaced and in need of urgent assistance.

First, 2,600 years of Middle Eastern Jewish civilization was destroyed. Now, 2,000 years of Christian history in Iraq and Syria is being erased, with very little hope of a future.

The biggest question on the mind of these Middle Eastern Christian communities is not the typical “why is this happening?” It is “why are the Christians in America not helping us?” They feel very alone, and abandoned by the western Church.

A recent picture of a refugee camp in northern Iraq showed one tent with Arabic writing on the top of it. The translation reads: “Jesus is the Light of the world.”

Canon Andrew White, the Vicar of Baghdad, has another picture of a refugee camp in northern Iraq where some of the members of his congregation are now camped. Knowing it is the Christmas season, his congregants have erected a refugee tent for Jesus.

Refugees are near to Jesus’ heart; He and His parents were refugees in Egypt when He was a baby. But, these refugees are especially dear to Him because they are suffering persecution for their faith in Him.

While Jesus is busy comforting and encouraging the refugees, where is the western Christian world? It seems to be fat and happy, in a very deep winter’s sleep.

What You Can Do

At the very least, families and churches should make donations towards food and blankets for the refugees. The ICEJ is collecting donations for reputable ministries working on the ground, if you do not already know of one. The ICEJ also issued a letter to over 90 heads of state around the world urging them to speak up and to take action to help the persecuted Christians of the Middle East.

That letter as well as this article should be circulated to all elected officials representing you in Washington, DC. Few of them know what you now know. The ICEJ is happy to speak with anyone to brief them on the situation.

Put yourselves in the refugees’ place. You would also be praying for food, a blanket, and a place to go. Be an answer to someone’s prayer today.

Susan Michael serves as the US Director for the International Christian Embassy Jerusalem.