Last week, Israel resumed its airlift of Ethiopian Jews, known as “Operation Tzur Yisrael” (Rock of Israel), with two flights arriving at Ben-Gurion with 340 new immigrants. The International Christian Embassy Jerusalem is one of the key sponsors of this massive wave of Aliyah and Nicole Yoder, our Vice President for AID & Aliyah, was on the tarmac last Wednesday to welcome the first flight of this renewed airlift of Ethiopian Jews to Israel. 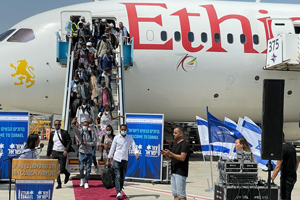 The flights last Wednesday and Thursday opened phase two of Operation Tzur Yisrael. Phase one was launched last fall and brought home 2,000 Ethiopian Jews amid civil war and the corona crisis. Another 3,000 will now be flown to Israel over coming weeks as part of phase two, and the ICEJ will be on hand to greet more Ethiopian immigrants we will be sponsoring as the flights arrive.

Many of these new arrivals have been living for 20 years or more in run-down transit camps in Gondar and Addis Ababa, waiting for their chance to rejoin their families and the Jewish people in their ancestral homeland. Israel’s Minister of Aliyah & Absorption, Pnina Tamano-Shata, herself an Ethiopian Jewish immigrant at age three, has been spearheading the effort to revive the Ethiopian airlift suspended over recent months due to COVID and other factors.

Over 95,000 Ethiopian Jews have immigrated to Israel since the 1980s, many in emergency airlifts to escape war and famine. With their offspring, the Ethiopian community here in the Land today numbers over 140,000 members. The remnant of Jews still left in Ethiopia were previously prevented from coming because they are considered Falash Mura, a term for Jews who were forced to convert to Christianity several generations ago for economic and other reasons. They 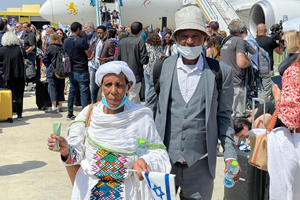 continue to practice Judaism and have close relatives in Israel, so the Israeli government approved the resumption of the Ethiopian Aliyah in 2015.

Since that cabinet decision, the ICEJ has sponsored the flights for 2600 out of the approximately 4500 Ethiopian Jews who have arrived in Israel. We also have been very involved in the integration phase of their Aliyah process, as it takes several years for many of the Ethiopian immigrants to adjust to the new language and culture in Israel. Nonetheless, with so many relatives already in Israel who speak Hebrew and have homes and jobs, it provides a softer landing spot than some of the earlier arrivals experienced.

The ICEJ is privileged to be an integral part of the historic and prophetic return of Ethiopian Jews to the Land of Israel, just as the Hebrew prophets spoke (Zephaniah 3:10). This ancient Israelite community dates back several thousand years to when King Solomon met the Queen of Sheba, and perhaps even further back to Moses, who married an Ethiopian woman (Numbers 12:1).

Please consider making a generous gift to assist us with the resumed airlift of Ethiopian Jewry. You can help end the long wait for an Ethiopian Jewish family and reunite them with loved ones and the Jewish people back here in their biblical homeland.