Jerusalem Day Turns out Differently for Lod this Year

By: Laurina Driesse, Director of Media and Publications 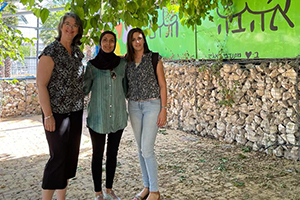 On Sunday (May 29th), Israel marked Jerusalem Day (Yom Yerushalyim). This is normally a time for jovial celebration, as the streets of the capital city are lined with Israel and Jerusalem flags flying high. But lately it has also become a day filled with tension and threats from Israel’s foes.

As Jerusalem Day approached, there was a nervous unease in the air and security forces were on high alert. Last year on this day, Hamas fired missiles at Jerusalem from Gaza, triggering an 11-day rocket war. The violence spilled over into Israel, as clashes between Arabs and Jews broke out in the streets of several major cities. In Ramat Eshkol, a neighborhood of Lod near Ben-Gurion airport, Jewish and Arab residents who have lived alongside each other for decades began banding together against one another and fighting in the streets.

The Community Center in Ramat Eshkol opened its doors in 2012 in a mixed neighborhood of Arabs, religious Jews, and Ethiopian Jewish immigrants. Unfortunately, poverty and drug abuse coupled with violence and crime are rife there. Nevertheless, the Community Center is a friendly place for people to gather and engage in uplifting activities.

Until 2018, the Jews and Arabs who frequented the Community Center did so separate from one another, with Jews making use of the upper level, while the Arabs used the lower level. There was no connection between the staff coordinators and each team had their own community director. Then, a shift took place, as each community began coordinating and working together.

Nicole Yoder, ICEJ Vice President for AID and Aliyah, recently visited the Community Center in Lod and heard from local leaders how their town is considered one of Israel’s most complicated cities, second only to Jerusalem.

Chanadi, the Arab community director, shared how difficult it was for her to start working with her Jewish counterparts. At first, she was completely opposed to the idea of sharing the Center’s space and integrating the teams. When challenged to explain “Why not?”, she pondered the question for two months before agreeing to move forward together.
“There was a lot of fear. I had to separate internal issues of identity and politics, to consider the practical implications for everyday life,” explained Chanadi.

Racheli, a Jewish social worker helping elderly Jewish residents at the Center, expressed her own reservations as someone who did not grow up in a mixed community. So, it also took her some time to get used to living in such a multi-cultural setting in Ramat Eshkol. But just when she felt she had adjusted, the troubles came.

“Suddenly, there was war in the streets, and it was very scary”, recalled Racheli. “I wondered, ‘Where did I come to?’ There was a lot of confusion. I was afraid to return to work. I love my Arab and Jewish co-workers, but after the crisis situation, it was hard to return to work and speak to my Arab colleagues.”

Hadas, deputy director of Jewish programs at the Center, also shared how she has been living in Lod for 12 years, raising her six children there.

“There is something special about the mixed population. Many have asked us if we would leave after what happened, but I believe that you have to separate what happened in the country with what happened in Lod. We want the extremists to leave”, stated Hadas. “Last May was tough, but we have lived together peacefully for many years… We must decide what we’ll do going forward. I don’t fear Lod. What discourages me is the surrounding voices that want to separate us.”

“I got used to living here, then May was a big ‘boom’,” added Iludai, an Ethiopian Jew who has lived in Lod for 20 years and works with single parents and children at the community center. “My workplace was burned. When there was an alarm of an incoming rocket attack, we couldn’t go to the shelter. We talked a lot about what happened. It was very difficult for me. My daughter is still afraid when I leave for work”.

With the community fractured and shaken to its core by the events of May last year, small steps are being taken to rebuild trust and unify the communities.

“We’ve opened conversations between parents, the children, and the community center. We’ve begun to open shared spaces. This is a first!”, said Fatin, who helps mentor the community workers in developing “shared spaces” projects.

Part of the process included conducting a community survey. The findings showed the need for a shared play area for the children, so some remodeling and purchasing of equipment was needed. They also developed a library for exchanging books, purchased and installed musical instruments outside in the play area, and prepared an area for bicycles, as well as a bicycle club that the children can enjoy.

The Christian Embassy is supporting reconciliation and coexistence at the Community Center by funding the refurbishing of the outside bicycle area to serve the new bike-club, upgrading benches to sit in the shade, and purchasing bicycles which the children can borrow from the Community Center. In time, the Arab and Jewish children in the bicycle club hope to represent Lod together in competitions.

“The donation was significant because it turned on a light in a dark place”, assured Hadas. “Everyone was in post-trauma. It opened possibilities automatically. It helped both Arabs and Jews. It is forbidden to let this opportunity die.”

There is still much work to be done in this fragile community, and Chanadi dreams of being able to renew the building and provide educational opportunities for adults as well as cultural and vocational training. The important thing is for everyone to feel they belong and are equals. Thank you to all our Christian friends who give so generously to the work of the International Christian Embassy Jerusalem. Through your giving, this Jerusalem Day turned out much different than last year for this Israeli community.

Only with your generous giving can we minister projects like this—ones that truly bless the people of Israel!